My Trip to Eden


As I mentioned, I took a trip to my seminary alma mater last week for their Herbster event. This is an alumni continuing education gathering offered to graduates their first five years out of school. I could tell you all the stories we shared, but I'll stick close to the Official Program and let them trickle in. The thing about blogging semi-anonymously is you don't know how much is too much.

Well, the theme of the gathering was how church and culture interact.

So right off the bat, we discussed The Da Vinci Code. In a larger sense, The Da Vinci Code was the theme of the week for me, since the movie opened last weekend. Every news channel had a good amount of discussion devoted to this stupid book, I had several conversations with my in-laws about it later in the week, and I even heard a sermon about it on Sunday. I'm going to see it for myself on Thursday. Just between you, me, and the entire public who reads this, I'm not that excited to go see it. I wasn't that excited to read it. I think all the hype and all the religious 'OMG faith destroying~!' nutballism has ruined this piece of FICTION for me. Yeah, I broke out the caps lock, bold AND italics for that. Get a grip, people. Seriously. Somalian children are starving and this is what you get hot and bothered about.

What was I talking about? Oh yeah, so I went to Eden and we talked about this FICTIONAL story and its effect on church and culture. So we talked about the nutballism as well as how this book has inspired laypeople to open their Bibles and read for themselves. Yep, mainliners do that. Rock on. We also compared this book's effects with the hype around The Passion of the Christ, talked about how they're both interpretations, how they're both presented as fact in their own way (nutballism*), and American Christianity's reaction to/endorsement of each one.

The next morning was spent talking about liberals and conservatives and how we should be in dialogue and not shun each other, etc. I really can't bring myself to elaborate on that, because I'm sure most or all of my readers have heard it before. However, I will say that the method of presentation was a little different. Our presenter, Dr. Michael Kinnamon, used 1 John. This book is part of my 'canon within a canon,' so I looked forward to what he had to say about it, even though I thought that this would be about loving those you disagree with or something like that. What it turned out to be was what preachers call 'preaching against the text,' as he focused on the exclusive nature of the 1 John community when the writer refers to those who have left as antichrists and outside the truth. It was a great presentation, 90 degrees out from what I expected.

And the afternoon was spent talking about the pastor as spiritual leader, in contrast with pastor as therapist, talk show host, or CEO. It was an abridged version of any basic spiritual direction course, offering suggestions for contemplative disciplines one may take on to maintain a spiritual life. At one point during the 'pastor as...' discussion, someone asked about pastor as shepherd. I've been thinking about this one since the other Sunday when Jesus the Good Shepherd showed up in the lectionary, since no one is called a shepherd in that passage but Jesus. We're all sheep. The woman sitting next to me wrote me a note that said as much: 'Jesus is the one Shepherd. Pastors are sheepdogs.' I found that really helpful.

So that was the official program of the gathering. There was plenty of time to talk about what's going on in our churches and what we're thinking about ministry now that we've logged some field time, eat frozen custard (you've missed out if you visit St. Louis and have never sampled Ted Drewe's), and generally catch up with friends we haven't seen in months.

And someone caught us in this candid unplanned situation near the end: 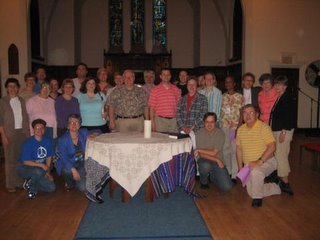 It was a relaxing couple of days, followed by a few more relaxing days with my wife's family. And then I came home. But that's another entry.

*Nutballism is my term. No one used it during the presentations. But seriously...it's FICTION.