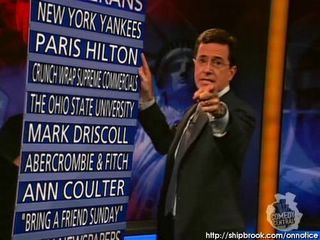 By Jeff Nelson
Email ThisBlogThis!Share to TwitterShare to FacebookShare to Pinterest
Labels: Linkage

I see that you have The Ohio State University on notice.....and in response to your "cute" little comment (which I didn't delete, by the way...as sorely tempted as I was), here is a lovely version to your UM fight song. Are you ready??

Wail on those smelly varmints,
dressed in women's undergarments,
Wail, wail on Michigan,
they just can't pass the test!

No Pasadena roses,
shove that football up their noses,
Wail, wail on Michigan,
Ohio State's the best!

love you too Jeffie. Ha ha!!

Personally, I was spitting coffee on my desk over "bring a friend to church Sunday."

-That Girl From Chicago

methinks there is a Wolverine fan that isn't willing to come out of hiding.......LOL.

I think you're all going to be looking for a new head coach after we tromp on you for the 5th time in six years. Lousy Lloyd better start preparing a resume because we're going to give him one nice parting gift! ;)

Of course you know it's all in good fun. Until game day. ;)

Lousy Lloyd? Boy, that cuts to the heart. Very clever, that use of alliteration. Just come up with another l-word that is in some way insulting, put it in front of his name, and you have an instantly paralyzing quip.

Wow. Lousy Lloyd. That just...wow. What'll those OSU fans think of next?

And yes, I'm pretty clever....pretty AND clever, so there. ;p

Oh, what can we do with Bo...there's Butthead Bo or Bo the Bum, or Baffled Bo...more of that clever OSU thinking.

But if you don't get started on Bo, then I won't start trashing Woody either.