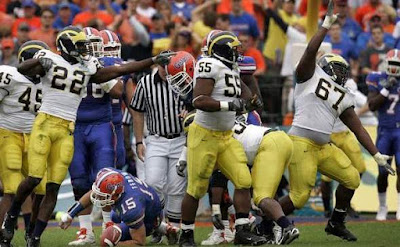 By Jeff Nelson
Email ThisBlogThis!Share to TwitterShare to FacebookShare to Pinterest
Labels: Sports

They played a very good game offensively. I was a little dumb-founded with Mike and his laughter as well .. on both of them.

But, they definitely showed what they could do when they are healthy. Manningham showed why I thought he had a chance to be Heisman material if they would open it up downfield to him more.

Matt and I were dumbfounded that he would laugh and walk over to the sidelines like he did after he cost them two touchdowns. Un. believable.

But, they played a great game and while we were NOT rooting for them, we are pleased that Urban Meyer and those stupid Gators lost.

While other folks were upset with Mike Hart after seeing him laugh off those two fumbles, I saw a good sport. What a refreshing attitude to have in the modern game.