At least the Cavs still have Lebron, right? Right?: As was rumored the other day, C.C. Sabathia is off to Milwaukee...

The Indians have agreed to trade the ace Sabathia and two lower-level minor leaguers for a package that includes top prospect Matt LaPorta and other minor leaguers, according to the Milwaukee Journal-Sentinel.

The deal is contingent on the paperwork and medical records, the paper reported.

Sabathia went 19-7 with a 3.21 ERA to win the AL Cy Young last season and would give the Brewers another power pitcher to pair with Ben Sheets as Milwaukee tries to make the playoffs for the first time since 1982.

The big lefty is 6-8 with a 3.83 ERA for the Indians, but has also been plagued with a lack of run support. In nine of his 18 starts, Cleveland has scored two runs or less for him.

Sabathia could make his debut as early as Tuesday for the Brewers against the Rockies.

Story problem: One of your best pitchers has a losing record, but it's mostly because your lineup hasn't produced run support.

Apparent solution: trade said pitcher for a hitter who...eh...might be okay. Oh, and some other minor leaguers.

The Indians are good at trading big names away for prospects, but then building those prospects into big names...and then trading them away for more prospects.

This is why I don't put U-M stuff on my car: Because I have a pretty solid suspicion that something like this might happen...

A Cape Cod man faces charges for allegedly beating another man with a baseball bat because he thought he was a New York Yankees fan.

Authorities say 20-year-old Robert Correia is scheduled to be arraigned Monday in Falmouth District Court on charges of assault and battery with a deadly weapon and malicious destruction to a motor vehicle.

The group accused the man, whose children were in the car, of being a Yankees fan, then beat him and vandalized his car. The man, whose name was not released, was treated at Falmouth Hospital with non-life threatening injuries to his head and body.

Way to keep things in perspective, genius. Who needs politics or religion when you can use sports as an excuse for violence?

I gave a sermon the other week that was all about how our loyalties shape our behavior, and I touched on sports as a strong influence as any: game time influences schedule, team's winning or losing affects mood, etc. I failed to mention how rivalries can cause us to retreat into our reptilian brains and try to inflict actual harm on others.

If only Harry Caray could call it: The Red Wings are going to play the Chicago Blackhawks at Wrigley field...

Michael Russo of the Star-Tribune in Minneapolis-St. Paul reports that the Red Wings will play the Blackhawks in the next NHL Winter Classic at Wrigley Field, home of the Cubs.

"The outdoor game has been in the works for some time but finally approved last week when NHL Commissioner Gary Bettman met with the Blackhawks, Cubs and Chicago Mayor Richard Daley," Russo writes.

The last Winter Classic was at Ralph Wilson Stadium in Buffalo as the Sabres lost to the visiting Penguins in a shootout.

The only question I have is: will anyone actually televise it? It's hard to find hockey on TV nowadays.

I've actually seen the Wings play the Blackhawks in Chicago when I went with a friend a few years back. I recall seeing almost as many red and white jerseys as fugly home-team jerseys in the stands, I recall the Wings being in first place, yet Chicago fans repeatedly chanting "Red Wings suck!" in order to better support their fourth-place team, and I recall getting beer thrown at me after the Blackhawks eventually won in overtime. Good times. 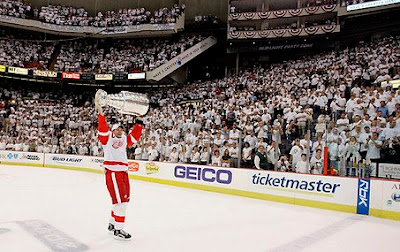