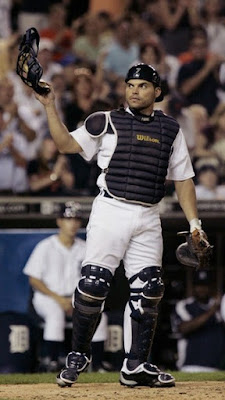 Pudge is now a Yankee.

Why not the Angels or the Cubs or Brewers or some team in contention who aren't the Yankees? At least then seeing him in a different uniform would be somewhat bearable.
By Jeff Nelson
Email ThisBlogThis!Share to TwitterShare to FacebookShare to Pinterest
Labels: Sports

Mitch Albom said it pretty well in his column in the Freep this morning. "Personally, I think Detroit fans like this move less because it involves the Yankees than they would if Pudge were traded to, say, the San Diego Padres. First off, everyone hates the Yankees. Plus it's possible (although a longshot) the Tigers could play the Yankees in the playoffs. If so, seeing Rodriguez play against his old team would feel like watching your older brother lead a hostile takeover of your business."