For one night only...

There are some who argue that this Saturday night, I should root for Ohio State when they play USC.

The argument goes that an Ohio State win makes the entire Big Ten look good, as the conference has taken a lot of flack due to its teams regularly losing to Pac-10 and SEC opponents (see: the last two Rose Bowls, OSU's tanking of the last two NC games).

So the Buckeyes beating the Trojans makes the Big Ten look stronger. Thus, even though I am a Michigan fan and thus am obligated to hate all things OSU, I should put aside the rivalry for a few hours for the sake of the conference.

Here's the thing. As a UM fan, I have not had a good decade. The Wolverines have only beaten the Buckeyes once, in 2003. Since moving back to Ohio, I have never enjoyed a UM win over OSU. And I've heard about it. A lot.

It's been quite a while since the John Cooper era, and Ohio State fans have forgotten what that sort of misery feels like. In fact, aside from choking the past two Januarys and that lone UM win in 2003, they've had little to feel miserable about.

While those NC games brought them back down to earth a little, a USC win during the regular season that keeps them out of that game to begin with would be even better.

(As would, unlikely though it is, a surprise upset by UM in November thanks to an OSU team perhaps looking past them...but I digress.)

So for one night only... 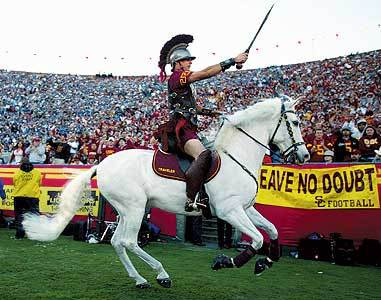 ...I'll be rooting for this goof's team.

It'll be especially needed after possibly the ugliest UM-Notre Dame game ever.

As a life long devote of Troy I thank you.
I route for UM to demolish ND. Even with the tiny little guys down on their hunches I want them to be embarrassed. I would love to see the BSC scrapped and a return to old with UM and USC fighting for the only prize that matters, the sweet scent of Roses!

I don't recall a U of M mascot on the sideline - no Trojan horse, no Ohio nut, no Florida gator... Can anyone help me?

Way to totally alienate yourself in the land of the enemy. I like it.

You should wear a USC tie on Sunday.

I totally understand...if it were the other way around and UofM were playing USC, even though I despise USC, I'd probably root for them. So I'm not going to give you any flack for that.

That being said, I'm totally scared for this game. I'm NERVOUS. And I'm not too obnoxious or conceited enough to admit it. ;)

By the way, you and the wifey wanna make a road trip? I'm making chili!

I remember the Cooper years bitterly, mostly because you and Coffeemom said "HA" every year Cooper treated it as "just another game."
Don't tell me about forgetting Charles Woodson and Tim Biakabituka (I don't care if it's spelled right, there's no way you don't know who I'm talking about).
In a time when part of this country chants "S-E-C" at an ACC opponent after beating them, you won't support your own conference.
Conference solidarity. I will be praying for Michigan to pummel ND into the ground. May you see the light before kickoff. Amen.
:)

Well, part of this is flat out sour grapes. Let's be honest.

Let's also be honest about something else. If this was UM/USC and UM was 6-1 against OSU this decade, would Buckeye fans still call for conference solidarity?

My take is that it's a lot easier to talk about solidarity when your team isn't the one constantly faltering.

During Cooper, I'm guessing that OSU fans LOATHED Michigan. Nowadays the traditional anti-UM feelings are probably still there, but do OSU fans get flat out angry (and I mean TOTALLY. P*SSED. OFF.) at the sight of maize and blue, given all the success that they've been enjoying under Tressel?

And where'd this conference solidarity stuff come from, anyway? I'm guessing the SEC people started it and basically others felt forced to play along.

Do they get totally p*ssed off at the sight of maize and blue? I know people who have nothing good to say about Michigan at all - not the school - the entire state! And they've never been there.

i can't believe that the OSU season tix holder at church was actually saying that they lost against USC because of the refs .....

If the refs hadn't been so doggone by-the-book literal in whistling Ohio State plays dead when a pass was dropped or a runner's knee hit the ground, the whole complexion of the game would have been different. And fer cryin' out loud, isn't there a little grace available for an extra down here or there when one is down on their luck? Can't a brother help out another brother in need?

On the other side, without question the refs should have whistled USC plays dead when their ball carriers spotted a would-be tackler within 10 yards. But, again ... no grace, no seeking justice rolling down like waters, no loving kindness to the least of these ... just by-the-book, literal, fundamentalist rules interpretation.

Think about this: no one has undertaken a scholarly study of the rule book as literature. What was its cultural setting? Who were the people the authors were speaking to? It can't be the voice of Footballgod dictating directly to scribes ... there had to be many authors witnessing to the inherent goodness of Footballgod whose words were redacted over time and lost some of their original intent that would have helped the Buckeyes, if only that lost meaning were recovered and properly interpreted. Perhaps each section of the rule book should be voted on with red, pink, gray, and black marbles to determine its authenticity and relative historical accuracy by a group called, uh, the Pigskin Seminar.

Blame the refs? Darn right. It sure wasn't an imbalance of talent or skills that lost us the game. It was a right-wing conspiracy. For sure.

p.s. On the other hand, USC could have handed OSU a plain ol' butt kickin'. See? Fair and balanced. You decide.ylqwwobs