So in case you missed it, I was at the Michigan-Toledo game this past Saturday that ended in Lopata missing a chip-shot field goal to cement the first ever U-M loss to a MAC team.  And the collective face of 108,000 people, hopeful about going into overtime and eventually salvaging this near-Appalachian State debacle a second before, began filing out of the stadium while the Toledo football team celebrated with their corner section of fans in the far endzone.
As I slowly made my way out, I overheard two older men--perhaps they were alumni, but I really couldn't tell--proclaiming the season over as they went over the remaining schedule and tried to come up with even one possible win.  And they blamed the coach.  They even blamed that final missed field goal on him somehow.
My brother and I had our own thoughts.  We did question some of RichRod's decisions.  We saw McGuffie attempt to run through a gauntlet of Toledo players in what seemed like play after play after play after play.  I wondered where the innovative spread-out-the-field passing game was.*  I momentarily forgot that this is a young, inexperienced, Lloyd-recruited team largely unaccustomed to the type of offense that RichRod wants to run, and that RichRod has a bunch of spread-oriented studs arriving as soon as January.
The reality of how bad this season would turn out, how patchwork the team is, how far away 2009 is...it all came fully into focus.
Fortunately, Brian at MGoBlog is willing to offer despairing fans some tough love (caution for language)...

Sports suck sometimes, especially when you care so much about something you control not at all. I assure you that every Michigan fan was angry on Saturday, and every one had second thoughts about this New Era thing. Some of them chose to swallow that anger, and some chose to give it to someone else. What's the adult thing to do? What would those people in hats have done in 1935?

They would have sucked it up. So suck it up, you pansies. It hurts. Act like a man about it.**

Go do something else. This makes you mad. People say Hinterland is pretty good and it's only twenty bucks. Go play that. Go ride a bike. Or hike into the woods and look at the chipmunk-bears. Build 60-foot sculptures out of balsa wood and your shattered hopes. Just get off the goddamn internet.

Come back in fits and spurts and keep whatever connection you want to have with the program but don't hit that post button when the vein on your forehead is sticking out. It's not that important.

This has to be rock-bottom.  It can only get better.  The bowl streak is over, and I'm going to have to swallow the prospect of a 5-year losing streak to The Sweatervest (I'm not sure that I'll even bring myself to watch that game).  That's to say nothing about just how much Penn State and Sparty are foaming at the mouth for their upcoming games.
I mean it in the least arrogant-sounding way possible that a losing season is a new thing for many Michigan fans.  This coaching change has brought such a multi-dimensional culture shock that people don't know how to handle it.
As for me, I've already resigned myself to just how bad this year is going to be.  And after the darkness comes the dawn.  There's a reason why these words from Bo have been immortalized: 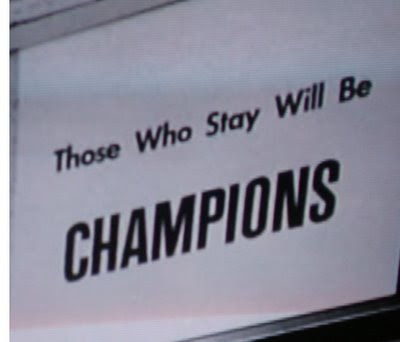 I can wait.  Not always with patience.  But I can wait.  Go Blue.
*Since wondering that while sulking on the drive home, I've since learned that RichRod's spread is a spread option, which does tend to be run-heavy and is not necessarily all about the passing as other versions of the spread might be.  But still...Threet has a decent arm when he isn't trying to overdo it.  Just sayin'.
By Jeff Nelson
Email ThisBlogThis!Share to TwitterShare to FacebookShare to Pinterest
Labels: Sports
Newer Post Older Post Home