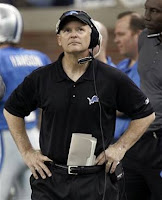 The past few days, at least three NFL head coaches have lost their jobs. The Browns fired Romeo Crennel, the Lions fired Rod Marinelli, and the Jets fired Eric Mangini.

Even one who doesn't normally follow football could look over these teams' performances and most likely say, "Of course." Cleveland finished 4-12. Detroit...let's just skip that one. And New York faded down the stretch and missed the playoffs. One may have an argument in favor of keeping Mangini, but the inability to meet high expectations for the season sees him looking for another job.

When sports teams continually flounder or some teams, particularly those in bigger markets such as New York, don't meet expectations, the pattern has been to place blame largely on the shoulders of the coach. It doesn't matter, for instance, that Bret Favre had 2 touchdowns and 9 interceptions in their last five games. No, Mangini's head was the one that was going to roll regardless of other possible factors. The Browns had an unstable quarterback situation all season, but Crennel got the blame and the pink slip.

When it comes down to it, the guy in charge is held responsible for a team's performance. Never mind if an individual player's attitude is hindering the team, or if a player isn't giving it his all, or if the team as a whole is plagued by injuries, or if an offensive or defensive coordinator isn't using his entrusted players properly. No, it's the head coach's fault. So the solution is to get someone else, and all those other issues may somehow right themselves.

There are times when the church operates under a very similar philosophy. If a church's culture is very pastor-centric, praise or blame will be assigned to the pastor depending on how successful the church is.

Yes, this is a business-oriented philosophy. Yes, this is a view of church that is based on budget and attendance rather than discipleship or mission. And yes, this is the type of church culture that hasn't quite grasped the "priesthood of all believers" concept. If the church isn't "successful," however one measures success in such a setting (again, usually budget and numbers), the pastor's job security may be the first to get a look.

At other times (more often than not, I'd argue), there are other factors at play that can't or shouldn't be blamed on the pastor at all. Maybe the attitude of an individual or group is holding things up. Maybe there is a deeply-seeded pathology in the church's culture that needs to be weeded out; something in their past that they haven't dealt with properly. Maybe a church's approach to organization or development no longer works in its changing environment. These and other factors may be contributors to decline, and the pastor may even be dismissed for trying to get the church to address them.

Regardless, this pastor-centric, performance-based approach to church life doesn't seem to leave much room for mutual accountability. It certainly holds the pastor accountable, and perhaps for more than his or her fair share, but it doesn't properly hold the church accountable. It doesn't hold the church accountable for seeking "success" in spiritual growth, in mission outreach, in nurturing a culture of faithful discipleship rather than larger membership rolls. These things can't really be measured, after all, which can be frustrating for a church operating with a business mindset.

What if whole congregations began evaluating themselves the way they evaluate pastors? Would they be happy with their own score?

Or maybe we can just operate with a different mindset altogether, and not worry about questions like those.
By Jeff Nelson
Email ThisBlogThis!Share to TwitterShare to FacebookShare to Pinterest
Labels: Church, Ministry, Sports

it's hard not to see the other side of the coin as well. as a pastor for 21 years i thought the evaluation process was stupid and meaningless, even demeaning. then i got a real job where i was constantly evaluated and critiqued.

if a pastor wants a church to pay their salary they should expect to be evaluated. it's one thing to say we should evaluate the congregation, but they don't actually get paid. volunteers have a different, though meaningful standard. i understand the frustration of this process seeming to detract from the true calling, but the fact remains we wanted the "job". if it's a pure calling don't take a salary and then pastors will feel the incredible freedom.

unfortunately, not speaking specifically about you of course, pastors are not the top players i was once taught to believe. many are lazy, scattered, whiney and couldn't make it in the business world. imagine the frustration of paying someone like that...

but then again, i'm stuck in a kitchen right now and may be a little bitter... ha.

I do see Scott's point, but like you, I'm doing a lot of thinking lately about the congregation's responsibility. It's a lot like citizenship (and from there, civic responsibility). Just as it's really hard to convince people that they do own the government, and run it, with their tax dollars and votes, it's hard to convince congregations that it's really THEIR church, and that they're responsible, too.

Dang that's a heck of a run-on sentence.

Hey Scott. Thanks for commenting.

I also see your point, and agree that the paid employee should expect to be evaluated. I go through an evaluation every fall, and actually look forward to it in the sense that it helps illuminate areas I may be ignoring or concerns I could better address.

I would differentiate between evaluating a pastor's personal performance (preaching, pastoral care, team-building, collegiality, , etc.) and evaluating a pastor in light of the church's overall state of being. The latter is what I was trying to focus on in this entry. The pastor certainly affects that, but there are many other congregational factors most likely in play. Evaluating a pastor as somehow responsible for those factors--over which s/he may have little or no control--doesn't seem fair nor like the church is being fully honest with itself.

"Evaluating a pastor as somehow responsible for those factors--over which s/he may have little or no control--doesn't seem fair nor like the church is being fully honest with itself."

You're absolutely right. There are plenty of churches like that - I was a member of one up until a couple of months ago. In a congregational church, it's up to the members to grow the church and to lead it.

I have not had a formal evaluation in my 4.5 years, yet through the Church Council and committees, we are comfortable that we are on the same pages. I could not tell you how many hospital calls, funerals or weddings I have done ... I would hate for my ministry to be evaluated negatively because members weren't sick enough to be in the hospital for a few months. My sense of ministry is not about tracking numbers, but about being in community and communication with the congregation and finding ways to meet ministry opportunities using the resources within the congregation - the priesthood of all believers - which at times, of course, means me, not just as professional clergy but also as a Xn disciple who is a member of the congregation.

I think I'm being evaluated every time I show up in a hospital room or at a grieving family's home, when I can give thanks for 200 cans of congregation-donated sweet potatoes stacked around our Thanksgiving altar that are going to our local food pantry for Thanksgiving baskets, or instigate discussion on an issue affecting the congregation or community.