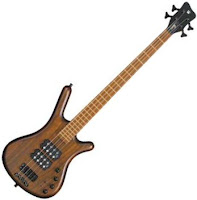 One of my plans for 2010 is to take bass guitar lessons.

"But Coffeepastor...didn't you say something a while back about wanting to focus on drums? Like here?"

Oh, you remember that. Well, here's the thing. I play guitar on Sundays for worship, and the amount of talent and dedication that it takes for that is all that I believe I'm willing to devote to that instrument. I'm actually comfortable with my current "praise song level" of ability. And make no mistake that "praise song level" is a true, albeit unofficial, level of ability...just learn the most common chords and become competent with a few barre chords and you can play no less than 98% of all praise songs ever written. What I really want is something I feel more passionate about, something I can dedicate myself to musically.

I thought that that would be drums. It was a no-brainer, really. They're my first musical love. However, I have a 20-month-old, and the only time I can really practice is when he's asleep. And I can't lug my drums someplace else to practice them. My church doesn't have a square inch of space to spare.

So that leaves the bass.

To begin with, I picked up the bass on kind of a lark. I'd been playing in a band my freshman year of college, and by the end of that year I'd begun to pick up a friend's bass and noodle around. He taught me where a couple notes were, and pretty quickly I'd decided that I could expand my musical repertoire. So I bought his cheap-o headless Cort bass (like so) and continued my noodling. The next Christmas I jammed on bass one evening with my uncle and cousin in New Jersey and discovered that I really did like playing it...that was probably the moment when I started wanting to be a real bass player.

Eventually I invested in a slightly better Steinberger bass (like so) and played it in a church praise band for the majority of my college years. The only thing was that I barely ever practiced it...I was content to play at "praise song level," which for the bass means that I played all the root notes with a few small runs thrown in. I did show flashes of brilliance, if I say so myself, but they were but flashes. Again, I didn't have the commitment, partially because I was involved in way too many activities in college, a regret that I harbor about those years to this day.

At any rate, my bass has sat unplayed for the majority of the time since then. I've pulled it out a little since, but not much. The past week, however, as I've anticipated taking lessons, I've played around with it more and have found a satisfaction in it that I haven't felt musically for years.

So why the bass and why now? I've covered the first. The reasoning for the second is that I've decided I need a hobby, a diversion from both family and church other than blogging. I love both of those things, of course, but I need something just for Coffeepastor. And if that something isn't musical, then there's something wrong with me. Other than what I do to practice my guitar for Sunday worship, I don't play much. And I've wanted to do more for a while.

(The other night after Coffeewife and Coffeeson had both gone to sleep, I sat in the living room, grabbed my bass, and put on a DVR'd episode of Better Off Ted. I can't describe how awesome that hour was.)

And why lessons? So that I really do it. It provides the accountability that I didn't have in college.

I look forward to getting started.
By Jeff Nelson
Email ThisBlogThis!Share to TwitterShare to FacebookShare to Pinterest
Labels: For No Particular Reason
Newer Post Older Post Home