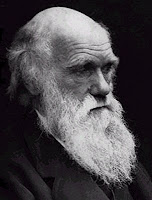 I've never been a big science guy. That's not to say that I'm anti-science, or afraid of what I might learn from it, or a big creationism follower, or anything like that.

It's just to say that, in school, it didn't energize me. You know how some kids slog through Sunday School or confirmation because they think it's boring? That was me and science. I didn't do horribly at it, or even really find it difficult (except for chemistry...stupid periodic table with all your atomic weights and figuring out what P signifies and whatever). I was just interested in other things.

And now as I've gotten older, I've become more interested. I realize that it's something that I haven't devoted a lot of energy to understanding, and that particularly in this day and age where religion-science debates seem especially to be raging, I'm not satisfied with my passing knowledge. In college especially, I took this biology class on sex and death and finally began to appreciate how cool and fun and interesting science really is.

And see, it's not even really because of those debates. I mean sure, it'd be nice to understand various subjects more for that reason, but I just think there's a lot of fascinating stuff in those areas that I just haven't exposed myself to.

So I turn it over to my readers to help me out. I don't know how many of you are die-hard science buffs or even take a more leisurely interest. Where do I start, particularly evolution and physics? I mean, do I just pick up Origin of Species, or should I start somewhere else?

What would you recommend to someone looking to deepen their understanding of current scientific theories, knowing that they haven't really touched a science book in 7-8 years?

I'm intrigued by quantum physics as well, but it seems advanced...like I have to read some prerequisites first or something. But maybe that's not really the case. See, I need someone to tell me that. I cruised over to the science section in Borders a month or so ago, and had no idea where to begin. I'm pretty sure I ended up picking up yet another theology book instead.

I just want to be more informed in these areas than I am. Thanks for any help that you can give, CoffeeNation.
By Jeff Nelson
Email ThisBlogThis!Share to TwitterShare to FacebookShare to Pinterest
Labels: Open Forum

oooh... Evolution by Prothero is good, as is Evolution by Carl Zimmer,,, Beak of the Finch is a good in depth study. Imagine knowing the finches so well that you can identify individuals! Microcosm: E.Coli by Carl Zimmer is also good. It'll change the way you think about your insides, that's for sure! That's off the top of my pile of "consumer science books"...

as far as physics and quantum theory, have you tried looking at Hawkings' "A Briefer History of Time" and any of the books by Brian Greene? I have not read any of them, as I am more fluent in science than theology, but I would be willing to be a reading and conversation partner with you. Let me know.

I, too, have read Stephen Hawkings' book, and found it fascinating without talking over my head! Another, somewhat older, look at time, space, culture, and the evolution thereof is Carl Sagan's Cosmos. I have read the book and watched the series of videos. His approach is such that you don't actually question whether the cosmos was created or simply came into being. He still leaves that question up to the reader. He just explains, in simple and entertaining terms, what is known and what is suspected. I think you'd enjoy it.

John Polkinghorne might be a good place to start - he's a physicist who became an Episcopal priest. Two books I'd recommend are Quarks, Chaos & Christianity and Quantum Physics and Theology: An Unexpected Kinship. I've read the former and found it really good - the latter has been recommended to me. Happy reading!

I just checked out a book from the library on Pluto and the science of astronomy...because I saw it on the Daily Show.

-That Girl from Chicago

I'd recommend Bad Science: very refreshing and relevant... and worrying.