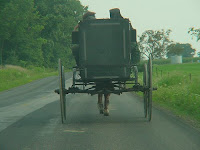 I don't watch 24. I've been curious, though. One time, I was telling a friend that I was thinking about renting either 24 or The Shield from the beginning, but I couldn't decide which one, and he said, "Dude...Vic Mackey is so much cooler than Jack Bauer." I still haven't gotten around to watching either one.

But yesterday, I learned a piece of information that seriously scored some points for Vic. Apparently on this past week's episode of 24, the good guys discovered that the terrorists or whomever they're fighting are planning to attack the city of Kidron, Ohio. Sure enough:

Kidron, Ohio, is facing a deadly leak from its chemical plant, one that might kill as many as 18,000 people out of the community's 30,000.

At least, that's how the Fox TV series 24 described the potential result of a terrorist plot launched at the end of Monday's episode.

It's odd that a network show would decide to make a target of Kidron, a small, unincorporated community that is part of Sugar Creek Township in Wayne County.

The mention is courtesy of Brannon Braga, a former Canton resident who is now a co-executive producer and writer on 24. Back in September 2007, before the writers strike stalled production of television series, he co-wrote Monday's episode with Manny Coto, another writer-producer on the show and a regular collaborator with Braga. (The two also teamed on the Enterprise TV series.)

In a telephone interview, Braga said, ‘‘I thought a nod to Ohio would be fun.’’

I more or less grew up near Kidron. In fact, I still don't live that far away from it. It's a cute little town with a big Amish/Mennonite population, a private Christian school, a livestock auction, and a hardware store. I'd consider it a silly kind of location for a major terrorist attack.

But, of course, the Kidron on 24 is different: it's bigger and it has a chemical plant. To someone familiar with the real Kidron, this is pretty laughable. But for most of 24's viewers, it probably doesn't matter. I guess this is all to say that 1) those making Jack Bauer pilgrimages should brace themselves for disappointment, and 2) I might start watching this season, if only for amusement. But I doubt that's why they'd want me to watch.
By Jeff Nelson
Email ThisBlogThis!Share to TwitterShare to FacebookShare to Pinterest
Labels: For No Particular Reason

There are so many movies that make laughable attempts at Chicago. But I guess that's to be expected. I think you should tune in, and see what they do.

-That Girl From Chicago

I read that and the entire time I'm thinking, "Chemical plant? 30,000 people? Kidron?" Maybe the auction house's poo-handling system malfuctions, but that's a job for a couple of guys with shovels, not Jack Bauer.