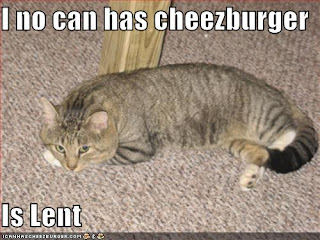 My thoughts and plans for Lent, even on this first Monday of the season, are not fully formed. I have a few things in place, but I don't feel like I have a clear handle on what I'm doing for my own discipline yet.

We'll start with the church stuff, because that's easy. Ash Wednesday, as best as I could tell, was a very meaningful time for those who attended. The video meditation seemed to resonate with a lot of people, and overall attendance seemed to take a slight bump up. We imposed ashes, I briefly talked about why we're invited to take on any sort of discipline during this time (to remind ourselves how much we get in the way of our own listening for how the Spirit is guiding). The whole thing couldn't have gone much better.

Coming up is our series of programs on Wednesday evenings, and I'll be facilitating discussions around some of Rob Bell's NOOMA videos. For the crowd that usually turns out for this, I'm guessing that these will provide some slight culture shock. But reflections during Lent are supposed to push us, right?

Besides that, I mentioned that my plans for personal discipline haven't fully formed. And they haven't. Let me begin my explanation by offering the following: March's schedule is ridiculous. My weekends are full, including two trips that I have to make out of state, and there isn't much of a set rhythm to any of it. I'm not really upset about the specifics of what's happening...I just have a lot of it. And the lack of regularity has made it difficult for me to plan, say, a daily prayer time. I lost my quiet mornings long ago with the arrival of Coffeeson, and the fullness in particular of the weekends won't provide for much of an opportunity for it either.

At least, that's what I thought. I am right about March being ridiculous, and I am right about mornings being ruled out as an option. However, there are other times available for such things that I think could prove fruitful beyond Easter.

During the week, I watch Coffeeson on Mondays, and then generally do church work Tuesday through Friday. Usually I have early afternoons open before heading out later on for visits and whatnot. That early afternoon, in the middle of my day, might be the perfect time as with enough focus and discipline to become part of the fabric of my day of ministry. My other option is the end of the day, but that's not as much of a sure thing for any number of reasons. I can at least attempt it this next week and see how it feels.

I'm also giving up fast food. But that's actually been kind of a standard thing, and doesn't really provide the meaning or impact that "giving something up" used to.