Standoff at the UCC's National Office 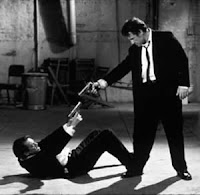 Okay, a quick polity lesson: at the national setting, the United Church of Christ has four governing boards that deal with different areas of our denominational life: Office of General Ministries, Wider Church Ministries, Local Church Ministries, and Justice & Witness Ministries. They largely act autonomously and hold one another accountable, as well as serve as resources for other settings of the church. It was set up this way in the spirit of congregationalism; the resistance to having one person or board at the top making decisions for everyone else.

That was, of course, until they decided that they wanted one board at the top making decisions for everyone else.

Over the past several years, a proposal has been making its rounds through the national setting to restructure the various boards into one big 86-member board, mainly in the name of expediency and budget cuts. A counter-petition has also been circulating detailing the reasons against such a restructure, among them: it will not give fair voice to historically underrepresented groups, it will promote elitism, and it will shift power to a more central location, which is against the UCC's founding spirit.

Well, the process has hit a snag. Justice and Witness Ministries, the final board to examine and approve this restructure, didn't approve it:

A proposal to form a single governing board for the national setting of the United Church of Christ came to an abrupt halt on March 20, after the board of Justice and Witness Ministries (JWM) voted 17 to 14, with three abstentions, not to move the process forward.

Meeting March 17-23 in Cleveland, the UCC's five autonomous boards were expected to consider wording changes to the UCC Constitution and Bylaws that would be brought to General Synod 27 in Grand Rapids, Mich., in June. Each of the five boards, including JWM, voted last year to take the governance changes to General Synod for approval.

"No matter what the outcome of our vote had been, I would have to stand before you and report there is considerable ambivalence on the Justice and Witness Ministries board," the Rev. John Gregory-Davis, pastor of Meriden (N.H.) UCC and chair of the JWM board, told a joint gathering of the boards. "We are not of one mind on this."

In the article, members of JWM cite the historically underrepresented groups issue and the central power issue as the main holdups for them as they considered this.

What strikes me as outrageous after JWM shot it down is this:

On the final day of its meeting, the Executive Council defeated a motion from its organizational life committee that would have asked the JWM board to reconsider its decision in hopes of still allowing the process to move forward as planned. Several spoke to the motion saying they felt it would be an untenable request given the short timeline and the emotionally charged atmosphere.

"Come on, you guys! Let's send this back to you, but approve it this time! Pretty please?"

Yeah, I'm being snarky. I've only had one cup of coffee so far, I have a cold, and it's been a rollercoaster of a month. But even besides all that, let JWM's "no" be "no," and consider that maybe there's still room in the United Church of Christ, even at the national office, for disagreement and reconsideration. Naw, can't be true, right? Oops, guess so.
By Jeff Nelson
Email ThisBlogThis!Share to TwitterShare to FacebookShare to Pinterest
Labels: United Church of Christ
Newer Post Older Post Home