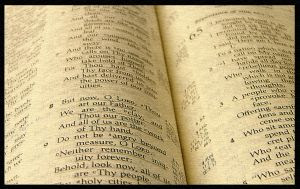 Shortly after I started this blog, I briefly chronicled my faith journey in a series of entries entitled "My journey (so far)." Part 3 mainly deals with a period of my life in college when my faith was undergoing a series of major challenges and retooling, and which I frequently point to as one of the darkest periods of that journey. Today is the anniversary of the climactic moment contained in this entry, and so I felt like presenting it in full.

1997-2001: The college years. I entered Heidelberg College already determined to major in Religion. It was my life's call and I would keep my eyes on the goal (my primary regret since graduation has always been not double majoring in either Literature or Theatre, but that's for another time). I was signed up for Old Testament my first semester and was on my way. In addition to my classwork, I connected with three Christian organizations on campus: B.U.C.C. ('Berg UCC, a UCC group), Campus Fellowship (a more evangelical group with loose ties to Campus Crusade for Christ), and the H.O.G.S. (House Of God's Servants, an on-campus house program). By the end of the first few weeks I had already decided I'd be a HOG next year, was the B.U.C.C. chaplain, and was playing drums in the Campus Fellowship praise band. I was on my way.

Old Testament had also begun, and I delved in with great interest. The professor began in Genesis (where else?) and pointed out within the first few class sessions the discrepancy between the two creation stories. The first story has plants before humans, the second humans before plants. He continued by drawing a diagram of the picture of creation that Genesis paints: a flat earth with a dome with stars stuck in it. When it rains, windows in the dome open. The weeks went on and I learned about the theory that the Pentateuch (first 5 books of the Bible) had 4 authors, each editing their material into those that came before.

Um....what? My literalist brain didn't like this. This class was supposed to be an interpretation course. The weeks wore on and I resigned myself to the defense mechanism that the first five books were metaphor. No big deal. So they didn't get all the details right. It was still fact. So there.

Fast forward to second semester and a little course called "Topics in Biblical Literature." The topics for this course would be the historical Jesus, creation, and the apocolypse. I signed up eager to learn, still continuing with all three groups to varying capacities. We spent the first half of the course on the historical Jesus, first reading through this little book. Immediately in the introduction warning signs flashed in my head as the author wrote about how we know little tidbits of what actually happened, but we can't be sure of all the material in the gospels. Class discussions and lectures presented similar issues, including which gospel came first and how others fed off it. Discrepancies began to appear, differing details, missing accounts in some places. Suddenly my 'well, some of it is just metaphor' excuse was beginning to crack. But I did my best to move along in my happy evangelical way....until it all came crashing down.

I remember the exact moment. I was at a Campus Fellowship gathering and we were having a discussion around a couple tables. People were talking about what some gospel passage or another had to say, and suddenly I admitted to myself, "I don't think this is true any more." I went through the motions the rest of the meeting, packed up, and left. It would be a long night. I tried going to sleep and watched as midnight came and went. Then one o'clock. Finally I got up and took a walk around campus. After this didn't help, I called a friend from B.U.C.C. who happened to be up chatting with her boyfriend, so I wasn't actually disturbing her sleep either. She was also in my 'Topics' class, so we talked about the material for a little while. During this conversation she admitted her own doubts and questions. It was good to know I wasn't alone. Then I was finally able to get some sleep.

I credit B.U.C.C. with helping me through the rest of that year. I gained an appreciation for my denomination as I sat around with other UCC members discussing this material. Suddenly I was giving myself permission to think through my beliefs instead of believing what someone else said to believe. It was exhilarating. I couldn't put the material down. It was fascinating to study, to question, to wrestle with my beliefs. I felt alive in my faith. Suddenly for me the Bible didn't have to be taken literally, but the Holy Spirit could still speak through any passage at any time. Jesus was still an atoning sacrifice but it was because the Romans put him up there, not because God told him to. Hell was looking more like being absent from God rather than some literal place under the earth.

The trick for me at the time, in addition to wrestling with these questions, was finding how to wrestle with this AND remain active in Campus Fellowship. I still considered myself evangelical, just a slightly different brand. The UCC has an evangelical background, after all. But I had already heard from some in CF how much they didn't like what was being taught in the Religion program. It was threatening. It didn't teach literalism. It didn't teach The Truth. I'd engage some in discussion about these claims from time to time, but didn't want to ruffle feathers, lest I lose a couple friends. I still very much wanted to remain with the group as I found it spiritually uplifting despite my theological differences with some members.

Fast forward to my junior year, where things went to hell. Again. By this time I'd gained a great appreciation for Calvin and Reformed thought, was back to slightly right of the middle. I needed more faitih and less thinking. A thinking faith was good, but it didn't save you. Just trusting did. So I was a slight Calvinist, had become president of the HOGS, was heavily involved with the Campus Fellowship planning team, and unfortunately B.U.C.C. had all but dissolved (actually it had taken this hard social justice turn under a new campus minister that I wasn't into at the time).

The fit really hit the shan second semester of that year. First, over Christmas break I picked up a book by John Shelby Spong, which threw me for a violent loop. My faith started crashing down around me with each chapter as at the time I couldn't reason through a counter-argument. I had a thinking faith but for whatever reason this book left me feeling stupid. Couple this with a few articles I'd read later in the semester citing various similarities the story of Jesus had with other religious god-men. All this left me depressed, downtrodden, hopeless. I'd have bright spots, but they'd give way to doubts in a few days.

This was only one piece of the whole, though. Various actions by some Campus Fellowship members toward non-Christians (and even Christian non-attendees) were beginning to really test my patience. I was becoming angry at some of the judgmental and mean things I was witnessing. Of course it was all in the name of Preaching the Truth in Love, but I didn't see anything loving about it. By this time CF was also becoming much closer with Campus Crusade, obtaining 'witnessing tools' such as tracts which I found to be overly simplistic and trite as I read through them. "Pray this prayer. You're saved!" Some members were following non-Christians around telling them they'd go to hell if they didn't accept Jesus.

My real breaking point was twofold: first, a biologist came on campus to speak on the topic of whether Christians can believe in evolution (ultimately he'd say yes, they can). Some in CF decided that they wanted to counter this presentation with a creationist speaker. Still being a member of the leadership team, I raised questions and doubts about the integrity and credibility of this presentation. I was accused by some of 'being afraid of offending people.' It was like talking to a brick wall.

Second, a very good friend of mine related her personal experiences with some members of the group. Genuine pain and spiritual abuse was being inflicted on this person (not coincidentally she was another who was greatly appreciative of the Religion curriculum).

So during one CF meeting I made a small presentation in the form of a list of 10 things I thought the group needed to change about itself, among them "We are not God, so we shouldn't judge," "Religion courses and science can both be your friend," "Follow Christ, not doctrine," and so on. I'll admit now that some of these could have been worded better and the tone was probably more confrontational than I would have liked, but the presentation was of course met with opposition from some people. In retrospect, I wanted a non-denominational group (which is actually pretty denominational) to be ecumenical (recognizing multiple faith viewpoints), and some did not agree.

It didn't take long for me to notice that some thought very different of me after that meeting. Cold shoulders, snide comments. Some even took it upon themselves to delve into my personal life, spreading rumors, lies, and half-truths between one another without coming to me to confirm any one of them. Not that I wanted them to. By this time I didn't trust some people in that group, and no matter how often someone tries to Preach the Truth in Love to you, if you don't trust them, it doesn't mean squat. They aren't seen as a loving friend when that happens. They're just a nosy stranger. And at that time some were quickly becoming nosy strangers.

There were also many in CF who agreed with me and supported me to varying degrees. I leaned on them during this time, specifically for my difficulties with other members. But I could not bring myself to divulge to anyone other matters that were greatly disturbing me at the time.

Well meanwhile these Spong-inspired doubts were dragging me down even more, to the point where I couldn't bring myself to pray. I was once again disillusioned with belief, and it didn't help that I was also becoming greatly disillusioned with the church on campus. Finally I hit rock bottom late one night. I remember this exact moment also, even the date: March 29, 2000. I was sitting in the hallway on the second floor outside my then-girlfriend's (now wife's) room with her NIV Bible. It was a moment of desperation, a last resort. I was about to give up on my sense of call, resign the HOGS, switch majors. I just closed my eyes and said, "This is it. Please show me something."

I flipped open the Bible, and opened my eyes.

Wow. I'd have that verse tattooed on my arm a year later. And you wouldn't believe how well I slept that night.

I graduated with Honors in Religion, already enrolled at Eden. I still had a thinking faith, but now with a more mystical edge. I had also smoothed things over with some CF colleagues with whom I'd had differences.

But to this day I've never apologized for what I said the night of that meeting. And I'm still not a big fan of Campus Crusade.
By Jeff Nelson
Email ThisBlogThis!Share to TwitterShare to FacebookShare to Pinterest
Labels: Vintage CC
Newer Post Older Post Home