The Emerging Church and Authenticity 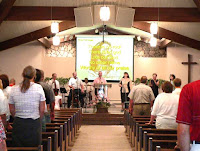 Nadia, aka Sarcastic Lutheran, recently wrote a post espousing what she believes defines the emerging church. But the bulk of her post seems to deal more with established churches attempting to tap into the movement:

Emerging church is not a worship style. I know emerging churches that do traditional liturgy with Jazz (Mercy Seat), who use electronica (Church of the Beloved), who are acapella Gregorian chant (House for All Sinners and Saints) and who do nothing but old time Southern gospel (House of Mercy).

So, when trad churches in the suburbs are wanting to attract young people (with all the good intentions in the world) and they ape some kind of worship style they read about in a Zondervan book by starting an "emerging" worship service, it's a bit ironic.

Ok, now before you leave me angry responses let me say; this is not saying that there is something wrong with the traditional church. Trad church is often a faithful expression of Christian community. But my friends would have to culturally commute from who they are to who the trad church is. This is why I want to make a t-shirt that says "light all the candles you want to; they are not coming". The back of the shirt would say "It's ok to be who you are (traditional, suburban, small town, conservative, Methodist...what ever it is..... Be it."

A pastoral colleague of mine once told a story about the last time he went through the search process. He said that he interviewed with two churches who told variations of the same story: they tried organizing a "contemporary" worship service, and it fell apart a few months into the venture. This colleague observed that it was most likely because their hearts weren't really in it; that they were doing it because it's what you do to attract younger people.

In a sense, this is Nadia's point as well. Traditional churches see what the emerging church has been able to do with more experimental worship styles, and thus they think that starting a similar service patterned after one of them will have their sanctuary bursting at the seams with young hipster types. A better way to do it would be to approach present young people and ask them what would be meaningful to them AND inviting them to organize it--which is how a lot of emerging churches actually started--rather than assuming that one can just airlift a service that works in one place into another.

I'm mainly struck by the bolded line, though. This is a universal truth for churches, I think. Whenever I take a step back and look at any worship style that I've been a part of, I realize that we're asking a lot from people who aren't familiar with church culture. The songs, the rubrics, the unspoken request to sit silently and watch or listen for extended periods of time...for people more used to relaxed interactive time with friends or who listen to music vastly different than what one typically finds in churches of any worship style, it's probably quite a stretch indeed.

It's also what I see as I continue to think a lot about how many churches organize fellowship. Many of us are so used to a model of church where we divide our membership into groups according to age or gender, stick them in the church basement or a classroom, and say, "Here...bond." And we assume that because they have some common biological features it'll just happen.

I continue to rethink this, mostly because I haven't found it to be the most successful thing so far in my own ministry, but also because we're again asking people to make a cultural commute from the people they'd hang out with otherwise to this monolithic Christian ghetto in the fellowship hall. And the best answer for it, I think, is to revisit first Nadia's point about worship. These emerging church groups come together not necessarily because they're the same age, but because they have a common cause: to build a more authentic church model for themselves and invite others who are looking for the same thing.

I think that coming together around common causes and passions is the future of my own little church. We tried the usual fellowship stuff and it hasn't panned out. But what if they organized around something they're really passionate about such as mental health or cancer awareness or building houses, and fellowship is built around these things instead? People would be involved in something that would feel more authentic to them, something they've perhaps wanted to help with for years but couldn't find the opportunity until the church offered it to them. And then the church doesn't have to kill itself trying to entertain people in worship or forcing them into artificial subsets.