I'm about halfway through The Pastor as Minor Poet by M. Craig Barnes, which is a short book about the pastoral role using a different sort of metaphor. So often, we hear of the pastor as shepherd, CEO, coach, visionary, and whatever else, but here Barnes is presenting the pastor as one who searches for the deeper truths under the surface of ministry situations, which is what poets do. An example: a couple visits Barnes in his office expressing anger over the musical choices of the choir director, how she doesn't do things like their previous director of 25 years or so, doesn't even use his original material, and how Barnes, if he's truly a strong leader, needs to step up and fire her. Barnes recognizes that this has less to do with the choir director or how strong a leader he is and more about their grief over the former choir director's leaving. The pastor as poet digs underneath the surface to help the other person discover that deeper pain. So essentially, this is a pastoral care book, which I figured going in.

We watched Yes Man last night, starring Jim Carrey as a guy who's become a bit reclusive since his girlfriend left him. He sits in his apartment every night watching movies and even stands up his best friend the night of his engagement party. Eventually, he runs into an old acquaintance who convinces him to attend a self-help seminar where the speaker's point is to say "yes" to every opportunity no matter what it is. Hilarity and absurdity ensues. Carrey does his usual crazy rubberfaced thing, which I didn't mind as an appreciator of his early stuff, but the situations got pretty ridiculous even for me. Zooey Deschanel does her signature cute deadpan as Carrey's free spirit love interest, and even gets to show her singing abilities a little. I thought the movie was funny enough...not exactly on the level of his more acclaimed comedy stuff, but there were enough moments for me to be entertained.

The other night, I watched the Detroit Red Wings win the opening game of their playoff series against the Columbus Blue Jackets. My first Red Wings game was actually in Columbus, and I recall as many people wearing Detroit stuff as Columbus stuff. Notwithstanding, the Blue Jackets won that night, and for some reason I've been carrying a grudge against them ever since. It's petty, but seriously: Columbus Blue Jackets, Stanley Cup Champions? Please. Meanwhile, I wanted an excuse to post this picture again: 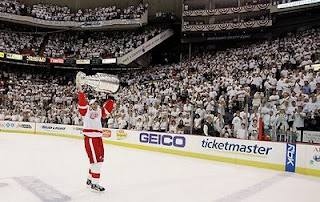 How many is that now?  I lost count...
Some friends gave me an album by Beth Orton while in St. Louis, a folksy sort rock from the UK. There are a electronic and rock elements in there, along with some horns and acoustic guitar, but this album is mainly propelled by Orton's voice. An excellent melancholy sort of album.

I also had the opportunity to download the first single from Dave Matthews Band's new album, called "Funny the Way It Is." Musically, the song is reminiscent of their stuff from Everyday, so I'm still trying to figure out how I feel about that. It's a tight, radio-friendly sort of tune featuring a brief violin solo from Boyd Tinsley and a longer electric guitar solo presumably from Tim Reynolds, Matthews' usual collaborator for such things. The late LeRoi Moore's saxophone, of course, is notably absent, although I read in Rolling Stone that some unused recordings are incorporated into other songs. But all in all, the song gives off a vibe recalling their least DMB-ish album, so we'll see how that goes.
By Jeff Nelson
Email ThisBlogThis!Share to TwitterShare to FacebookShare to Pinterest
Labels: Pop Culture Roundup
Newer Post Older Post Home