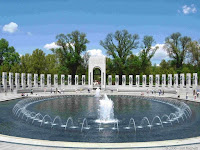 I never knew this about Memorial Day. The president makes an annual pronouncement that today be a day of prayer for permanent peace. Here's this year's pronouncement from political.news:

For over two centuries, Americans have defended our Nation's security and protected our founding principles of democracy and equal justice under law. On Memorial Day, we honor those who have paid the ultimate price in defense of these freedoms.

Members of the United States Armed Forces have placed our Nation's safety before their own for generations. From the first shots fired at Lexington and Concord to the current conflicts in Iraq and Afghanistan, these brave patriots have taken on great risks to keep us safe, and they have served with honor and distinction. All Americans who have enjoyed the blessings of peace and liberty remain in their debt.

As we remember the selfless service of our fallen heroes, we pray for God's grace upon them. We also pray for all of our military personnel and veterans, their families, and all those who have lost loved ones in the defense of our freedom and safety.

Today, as we commend their deeds, we also bear a heavy burden of responsibility to ensure that their sacrifices will not have been in vain. This means that, as we uphold the ideals for which many have given their last full measure of devotion, the United States must never waver in its determination to defend itself, to be faithful in protecting liberty at home and abroad, and to pursue peace in the world.

In respect for their dedication and service to America, the Congress, by a joint resolution approved on May 11, 1950, as amended (36 U.S.C. 116), has requested the President to issue a proclamation calling on the people of the United States to observe each Memorial Day as a day of prayer for permanent peace and designating a period on that day when the people of the United States might unite in prayer. The Congress, by Public Law 106-579, has also designated 3:00 p.m. local time on that day as a time for all Americans to observe, in their own way, the National Moment of Remembrance.

NOW, THEREFORE, I, BARACK OBAMA, President of the United States of America, do hereby proclaim Memorial Day, May 25, 2009, as a day of prayer for permanent peace, and I designate the hour beginning in each locality at 11:00 a.m. of that day as a time to unite in prayer. I also ask all

Americans to observe the National Moment of Remembrance beginning at 3:00 p.m. local time on Memorial Day. I urge the press, radio, television, websites, and all other media to participate in these observances. I also request the Governors of the United States and the Commonwealth of Puerto Rico, and the appropriate officials of all units of government, to direct that the flag be flown at half-staff until noon on this Memorial Day on all buildings, grounds, and naval vessels throughout the United States, and in all areas under its jurisdiction and control. I also request the people of the United States to display the flag at half-staff from their homes for the customary forenoon period.

IN WITNESS WHEREOF, I have hereunto set my hand this twenty-second day of May, in the year of our Lord two thousand nine, and of the Independence of the United States of America the two hundred and thirty-third.