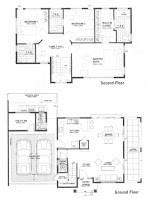 This past week, we signed the papers to build a house in the area. The projection is that, after all the finalizing of floor plans and whatnot, it'll be finished sometime late September or early October. So our first home-purchase experience is a house that has yet to exist.

This feels strange to me for a couple reasons. First, of course, it's my first home purchase. I would think that such a huge fiscal step would feel strange, exhilarating, anxious, regardless. In fact, I'm still not sure that it's hit me yet.

Second, the bulk of my home-dwelling experience is a combination of parsonages and places maintained by institutions of higher education. A continually-running toilet or a broken air conditioner has just always been taken care of. It won't be that easy any more. I know my way around a toolbox well enough, but there's only so much that I can do when something like that breaks down.

Finally, due to the terms of President Obama's incentives for first-time homebuyers, we'll be living in this house for at least three years. I've never lived in one area for longer than 5 1/2 years. What's that feel like, I wonder? Well, now I guess I'll know.

And we'll be in a neighborhood, as opposed to the rural isolation we're experiencing now. We don't have neighbors, or sidewalks, no trick-or-treaters at Halloween, and the local road is a busy county road where cars zoom by at 50 miles an hour. I have a stake in this on behalf of Coffeeson. Where we are right now, he can't walk to friends' houses, he could easily get hurt if a ball rolls into the street, we'll have to truck him someplace else for Halloween...I don't want that for him. Neither does Coffeewife.

It took some convincing for me to agree to build. When we toured potential neighborhoods for lots, all I saw was a couple scattered houses that maybe were next to each other among a lot of dirt, straw, and weeds. I know that the idea was to envision what the place would look like in a few years, but in the short term it wouldn't be that much different than where we are now. And Coffeewife and I both were surprised at how incredibly angry I got about that...I think there's some subconscious thing happening there that even I don't understand. But the neighborhood that we'll be living in is already pretty well-developed already.

And get this: apparently a couple of LeBron James' friends live there and he swings through every so often. So how about that?

There are also certain implications for my church, and maybe I'll get into those some other time.

So we're looking forward to this transition. It'll be a fun experience the next few months to watch the house gradually emerge. And, of course, it'll be wonderful to move in and begin making our house a home as well.
By Jeff Nelson
Email ThisBlogThis!Share to TwitterShare to FacebookShare to Pinterest
Labels: Quotidian
Newer Post Older Post Home