I am SO reading this book 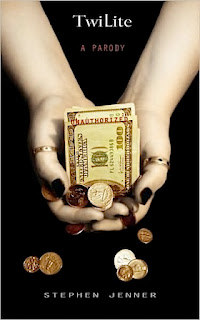 While Coffeewife was making her nightly trek through the blogosphere looking for updates on the New Moon movie, one of her sites willingly offered up news about a parody of Twilight. A sample:

I continued to scan the Sullens’ table for another available stud and quickly found one who was nearly as hot as Casper. Again I queried Maria, this time about the youngest Sullen boy, trying to hide my newly-formed schoolgirl crush on him.

“The boy over there, with the perfect face, nose, eyes, and lips…and chiseled chin, broad shoulders, strapping chest and tree trunk arms…and that V-shaped torso, thin waist and muscular legs like that of an Olympic cyclist. And perfectly manicured finger and toenails. Who is he, and what’s his story?”

“Oh, that’s Edweird,” she said, rolling her eyes as if they were the seven and ten pins teetering and deciding whether to fall down or not. “He’s dreamy. But he doesn’t date. Apparently, even the best looking girls in the school are not good enough for him. Rumor has it that he’s only interested in five foot four, average looking dark haired girls who only recently moved to Sporks from a hot climate state beginning with the letter “A.” Go find someone who fits that description!” Maria dejectedly shook her head, the contents of her shot glass riding up and spilling over the sides. She leaned down close to the table, shot out her pink tongue and lapped up the droplets.

I now turned my full attention to Edweird. Edweird looked as though he was transplanted to Sporks from the pages of Greek mythology. He was tall, with long, lean muscles, perfect angular features, and boyish good looks — remarkably like the boy who played Cedric Diggory in the Harry Potter movies, but with spiky hair. That’s all I’m going to tell you about Edweird now, but don’t you worry: I’ll be describing his perfection from this point on every chance I get in four — count ‘em, four — amazingly long (and expensive) books.

Not surprisingly, not many people on that site are able to laugh along with the author. I, on the other hand, was rolling on the floor.

The book is available on Amazon. The homepage for the book is here.
By Jeff Nelson
Email ThisBlogThis!Share to TwitterShare to FacebookShare to Pinterest
Labels: Posts That Prove How Sick I Am
Newer Post Older Post Home