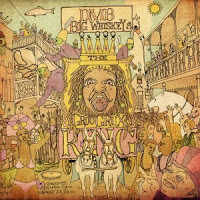 I read part of Unholy Ghost, a series of essays on depression. It was sitting on my bookshelf for a couple years, and I finally figured I'd read it. The book was not exactly what I expected, both good and bad. First, I picked it up assuming that this would be a series of firsthand accounts of battling depression...it mostly is that, but the writers take a different approach to it than I'd expected. I've quickly gathered that these are professional writers who have been assembled for this...the editor did not seek out amateurs for this exercise. To this effect, I've actually found myself rolling my eyes at how overdone and pretentious some of the essays seem...flourishing, rambling poetry where something raw might have been more effective. And many of the essayists seem more preoccupied with exploring themselves as Tortured Artists rather than people battling mental illness. Not every essay is like this by any means, but I tended to skip over the essays that were until I just got fed up. There are some wonderful accounts that explore the experience of dealing with this illness, and more often than not they acknowledge that it's near impossible to whittle the cause down to any single issue. I experienced it as a mixed bag at best, but eventually I tired of it and stuck it back on the shelf.

We watched Kung Fu Panda this week, which is a fun Dreamworks movie starring the voice of Jack Black as Po, a panda who dreams of learning kung fu and is eventually tapped to be the Dragon Warrior, a legend in his village who will rise up to be the greatest fighter of all. We also get voices from Dustin Hoffman, Angelina Jolie, Jackie Chan, David Cross, Lucy Liu, Seth Rogen, and Ian McShane. It's a fun, goofy movie that touches on the theme of believing in oneself.

A few weeks ago, I wrote about "Funny the Way It Is," the first song released off of Dave Matthews Band's new album, Big Whiskey and the Groogrux King. I was wary of the album based on the first listen, as it seemed to recall their work from Everyday...a little more canned, and more of an electric sound. Well, the entire album is now available for listening at Pandora, and my worries are abated. They seem more free again, and with a fuller sound that for me recalls Busted Stuff. The album drops this coming Tuesday. Fanboy that I am, I pre-ordered the deluxe version with the extra tracks.

From around the web, here's a guy playing the Simpsons theme on two guitars at the same time: