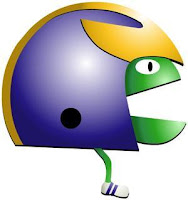 When I was a kid, I loved the TV show Square One. This was a half-hour long educational show put out by the Children's Television Workshop that taught math concepts in a series of short skits. They'd play music videos that loosely parodied real artists (and guest-starred a few such as Weird Al and The Fat Boys), they had Mathman, a take-off on Pac-Man who would have to solve math problems while avoiding Mr. Glitch. And the last ten minutes or so of every show featured a minisode of Mathnet, a take-off of Dragnet where Detectives Kate Monday and George Frankly would solve crimes using math.

Well, for one reason or another I was thinking back to how much I liked this show, and just for fun I looked it up on Wikipedia. While reading, I learned something about the show that I never picked up on when I was younger.

Look at Mathman's helmet. Does it look familiar to you at all?

Yeah. The writers of Square One were huge Michigan fans.

Other fun facts about the show to this effect from the Wikipedia page:

~The show would occasionally feature a segment about estimation in which a Michigan cheerleader would place a small object (e.g., a hamburger, a playing card, or a ping pong ball) in the corner of the playing field of Michigan Stadium. The viewer was then asked to estimate how many of the same object it would take to fill (or cover the playing field of) the stadium.

~In one Dirk Niblick segment, his mother posed a riddle about probability which mentioned a drawer full of maize and blue socks (Michigan's team colors are maize and blue).

~Another Dirk Niblick episode called "Do Not Fold, Spindle or Tape" had Roy "Wrong Way" Tiredamage (Dirk's old college friend from Where Was University) wearing a GO BLUE! shirt backwards. "GO BLUE!" is a phrase frequently used by Michigan athletics.

~In a number of Dirk Niblick mini-segments where he conversed with his mother on the phone, her "speech" was the University of Michigan's fight song.

~Among other sightings of the Michigan logo, a member of a ship's crew during an episode of Mathnet set in Monterey, California, wore a cap commemorating Michigan's 1989 Final Four appearance in NCAA men's basketball.

~There were also a number of joking references to Michigan's longstanding cross-state rivalry with Michigan State University. Two examples, both from Mathnet, included a villain saying that he had flunked out of the University of Michigan and "had to finish at Michigan State," and another villain having attended "Michigan Agricultural College" (MSU's original name) in "West Lansing."

~Another episode of Mathnet involved the kidnapping of a rockstar for a ransom to rent the University of Michigan Marching Band to play a march written by the kidnappers.

~In another episode of Mathnet, a reference was made reflecting the rivalry between Michigan and Ohio State University. While examining a list of bank accounts that had been robbed, the Ohio State Alumni fund was noted as having lost $136. When Pat Tuesday states, "At least they didn't get much," George Frankly replies, "What do you mean? They cleaned the whole thing out!"

~In one episode, George Frankly, in reaction to the name of a fugitive they were currently searching for, said, "Sounds like a linebacker from Penn State!" Penn State is a rival of the Michigan Wolverines.

Now I have to track down copies of episodes.
By Jeff Nelson
Email ThisBlogThis!Share to TwitterShare to FacebookShare to Pinterest
Labels: For No Particular Reason
Newer Post Older Post Home