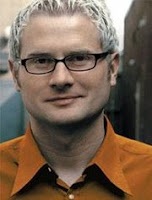 I'm not a Twitter person. It took me a long time to convince myself to join Facebook, and I've become stupidly addicted to that. But as far as rushing to my computer to let people know that I'm going grocery shopping or that I just ate lunch, just doesn't seem like a productive use of my time. A church member recently forwarded me an article about using Twitter during worship, which I also don't get (if nothing else because the article only cited some examples, and then not very clearly).

But I've heard the question that sparked this entry more than once, including on Facebook. First, an explanation of Twitter as I understand it: you sign up for an account, then type out 140-character updates for anyone to read about how you're sitting around watching TV, or you just came back from the bathroom, or your baby just threw up on you, or whatever. But I've seen the question asked, "If you had to Twitter the gospel (read: express it in 140 characters), what would you type?"

I would say that history is headed somewhere. The thousands of little ways in which you are tempted to believe that hope might actually be a legitimate response to the insanity of the world actually can be trusted. And the Christian story is that a tomb is empty, and a movement has actually begun that has been present in a sense all along in creation. And all those times when your cynicism was at odds with an impulse within you that said that this little thing might be about something bigger— with those tiny little slivers may in fact be connected to something really, really big.

As for me? It'd probably go something like this: "God's kingdom is near; Its way is love; Christ invites us."

Now, the problem with this exercise is that people who read these end up making all sorts of assumptions about what you mean, much like people are doing with Bell. For example, in mine there's no explicit mention of sin. Some who perhaps share my leanings know, however, that sin is in there: God's kingdom opposes traditional kingdoms that value power and violence, and the way of love is vastly different than revenge. The pithy statements that this exercise invites, I think, is at best the beginning of a dialogue about deeper meaning. I certainly would never make the mistake of thinking that one's beliefs could be adequately expressed in 140 characters.