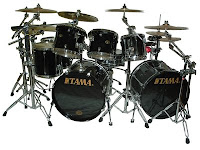 This past week, I decided that I want to play my drums more often. They're my first musical love, and always have been. And I've felt inspired to return to that first love in full force...not as in, "I'll play these once a week as a token gesture," but as in, "I want to at least touch them daily." I've dabbled in bass guitar and I play my acoustic weekly for Sunday worship, but drumming has been the constant, the one I can't leave behind, the one I usually don't have to think about when I'm playing (meaning I just feel the song and go). Drumming also relieves some tension for me, so I need it for that reason as well.

There are, of course, certain roadblocks to this endeavor: 1) job, 2) family, including small child, and 3) the only time I really have to play an unavoidably loud musical instrument is while said small child is asleep.

There's also one other problem, which I discovered yesterday when I was finally afforded some time to play: I suck. Seriously. I'm incredibly, embarrassingly rusty. I've counted myself as a drummer for nearly 20 years (!), but I've neglected them for so long lately that this is the result.

So I've decided that it's back to basics for me. It's time to hunker down with the fundamentals for a while and regain the form that I've so obviously lost. I'm talking some heavy time with rudiments...just two sticks and a rubber drum pad for extended periods working on rolls and paradiddles. And then some time with what Carter Beauford calls the "three basic ingredients" of the drum kit: bass, snare, hi-hat. No attempts at fancy stuff, just the barebones essentials. And once that sounds not awful, I can add other things.

So why am I bothering writing about this? Well, it's my blog and I do what I want. But besides that, have you ever lost or neglected something that you once loved, for so long that you wonder what it would be like to return to it now? Would it feel familiar, or would you basically have to start over?

I'm not necessarily starting over, but I know I need to bring it back to the basics for a while.
By Jeff Nelson
Email ThisBlogThis!Share to TwitterShare to FacebookShare to Pinterest
Labels: For No Particular Reason
Newer Post Older Post Home