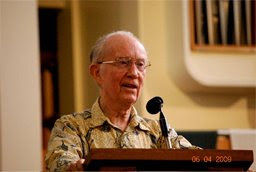 You mean, they weren't doing that before? One of my theological heroes, John B. Cobb Jr., recently spoke to the Southern California-Nevada Conference of the UCC and challenged the entire UCC:

In Cobb's own words, his challenge consists of "proposing that the United Church of Christ take as its mission working with God for the salvation of the world."

He says the UCC is uniquely positioned among Protestant denominations because of its embrace of progressive theology that sees Christian mission as inclusive of spiritual, personal, social and ecological care.

The progressive Christian project, Cobb says, theologically addressed and repented for a religion that had "acquiesced in outrageous racism [and found] that our inherited form of the Christian faith was anti-Jewish, patriarchal, religiously exclusivist, anthropocentric, and demeaning of our bodies and their sexuality."

The phrase "salvation of the world" obviously means something different depending on which Christian circles you run in, but Cobb clearly enfolds more physical concerns of the world with more spiritual concerns. His litany near the end of the quote of Christian attitudes that we've inherited is something with which we continually struggle.

The national office of the UCC has been striving for the things that Cobb mentions for years, though, and thus I'm not completely certain why this is news aside from the fact that Cobb is the one who said it. And if I'm being honest, that's why I included it here as well. At the national level, the United Church of Christ has seen its mission as "inclusive of spiritual, personal, social and ecological care." Not everyone agrees with its particular approach and some question whether we should be about that at the national setting in a congregational structure. But all in all I see Cobb's words as more of a re-affirmation of what's already happening, and it's possible that UCNews wanted to jump on that same sentiment.

Well, Cobb mentioned "anti-Jewish." Rev. Jeremiah Wright also made some headlines once again with his answer to a question about whether he's been able to see President Obama:

Rev. Wright was once President Obama’s pastor. The president resigned his membership at Trinity United Church of Christ after Rev, Wright and others made inflammatory comments to the media. Some of those comments were certainly taken out of context but Rev. Wright’s actions in 2008 made it impossible for then-Senator Obama to remain a member of Trinity.

I honestly don't have much to add to Chuck Currie's comments, aside from "What the hell was he thinking?"

My impression during the election was that people were taking Rev. Wright's words to be representative of the entire United Church of Christ. I'm not sure how widespread this was, but my own personal experience was that some definitely were making that leap. In this case, probably because this didn't get as much attention since 1) UCC National certainly isn't going to play it up, and 2) Wright is no longer Obama's pastor and Obama's already been elected, this didn't even seem to register on many people's radars.

There's little doubt about Rev. Wright's tremendous contributions to Trinity UCC in Chicago and to the UCC in general, not to mention civil rights as a whole. But comments like this can be so detrimental to being able to fully appreciate those other accomplishments, particularly for those who know little or nothing about them to begin with.

Not in our names. Rev. Dr. Michael Kinnamon, General Secretary for the National Council of Churches, gathered with other religious leaders to push for a commission to investigate torture practices:

Nationally recognized religious officials led a march to the White House on Thursday, urging President Obama to form a "commission of inquiry" into interrogation practices under the Bush administration.

The clerics joined other senior religious leaders and supporters for a "public witness," forming a crowd clothed in robes, collars, hijabs and yarmulkes.

"It is often said the way to move forward is putting behind the past," said the Rev. Michael Kinnamon, general secretary of the National Council of Churches, as he stood in front of the White House. "We who gather here today believe the way to the future comes after a full disclosure of truth of wrongdoing."

Again, not much to add here. I continue to wonder how people who follow a Lord who himself was tortured and killed by the state could disagree. That's my only thing.
By Jeff Nelson
Email ThisBlogThis!Share to TwitterShare to FacebookShare to Pinterest
Labels: Justice Issues, Politics, Small Sips, United Church of Christ
Newer Post Older Post Home