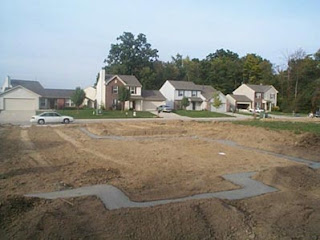 Here is an empty lot.

It is not our empty lot. Our empty lot hasn't even been mowed, let alone turned into a flat bare patch of dirt.

But it should have been by now. Our basement should have been put in yesterday. But it has not. There's some kind of hang-up with the engineering permit. So the original stated goal for us to be in by early October is now "hopefully before Halloween."

It's a little frustrating. It's not really in our hands, but we're certainly starting to raise a stink. Not a huge stink at this point, just enough for, like, people to wrinkle their noses and say, "Aw man, that's irritating. We should open a window." Except there's no basement, let alone a window. So the people smelling the stink have to live with it until they build the basement so eventually they can build the house with a window that they can open to get rid of the stink.

As you can see, it's a very complicated process.

The other thing that I have to figure out with my Consistory is a housing allowance, now that we'll be moving out of the parsonage. I need to read up a lot more about how to do this. I'm ordering a resource...the scant resources that I already have seem to indicate that I should have figured all of this out before the new fiscal year started, or even before I began here. If that turns out to be the case, this does not bode well. But as I said, I don't know much about that stuff yet.

I have a lot to learn, and it's a little nerve-racking. And having more than an empty lot would do a lot for morale.
By Jeff Nelson
Email ThisBlogThis!Share to TwitterShare to FacebookShare to Pinterest
Labels: Quotidian
Newer Post Older Post Home