I rip on The Shack a little bit 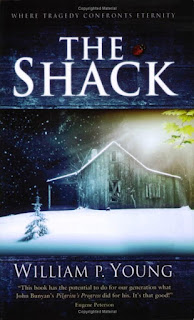 I never really intended to read The Shack, the latest "it" book for pop Christianity's consumption. It seemed like I wasn't going to have to deal with it in any meaningful way in my particular context, and I'd read enough about it on other blogs that I simply didn't want to bother. This was all before it was passed on to me a few weeks ago by someone singing its praises, so I've been reading it the past few days.

The basic gist is that the main character, Mack, is still dealing with the kidnapping and murder of his daughter a few years after the fact. We are very quickly introduced to him, his family, and the background of his grief. This is done so quickly, in fact, that it very much comes off as a formality observed just to set up what follows. The writing is simplistic besides, but I got the impression that any plot exists only to present the theological ideas in a manner other than a typical polemic.

At any rate, Mack is depressed. We're treated to a paragraph or two with about a dozen different metaphors to make sure we know that this is the case. One morning, Mack heads out to get the mail, when he discovers a note inviting him to meet at the shack where his daughter was killed. The note is signed "Papa," which is the name his wife commonly uses for God.

After minimal questioning (we don't want to linger on the strangeness of this note for too long, after all), Mack actually does travel to the shack and meets the Trinity--God as a large black woman, Jesus as a Middle-Eastern carpenter, and the Spirit as a petite Asian woman. This piece didn't bug me...it probably will bug many other people, but the book is clear that God has chosen in this instance to manifest in this way. Big deal. God's personified wisdom, Sophia, also makes an appearance.

Now that we've finally made it to the real purpose of the book, Mack interacts with the three and has conversations about theodicy, relationship, and so on. The general theology is a fluffy evangelical version of open theism. For instance, God talks a lot about being self-limiting in order to honor humanity's free will and refraining from special intervention in human events (such as the prevention of Mack's daughter's murder) in order to uphold the give and take that comes with human choice. God does mention working through such choices to bring about the fullest realization of love, or to put another way, God doesn't necessarily cause pain but does work with and through it. I didn't really have a problem with this piece, as I've long held something similar to it.

The problems for me start when I began to realize that God still avoids Mack's hard questions about suffering, typically responding, "You'll find out later." I didn't necessarily expect much more than what is offered, really. God seems to have invited Mack to the shack only to defer a lot of humanity's ongoing questions, choosing instead to stress how important it is to remain in relationship with God even through the hard moments and to not judge God in the meantime when these same non-responsive sorts of moments occur. In many ways it's the same "don't question God, but don't abandon God either" stuff that I heard so often during my more evangelical phase.

One brief piece that people understandably seem to have passed over takes place during a conversation between Mack and Jesus about the need for humanity to return to God. They discuss the garden of Eden story, and then Jesus starts into this:

Mack reached down, picked up a flat stone, and skipped it across the lack. "Is there any way out of this?"

"It is so simple, but never easy for you: by re-turning. By turning back to me. By giving up your ways of power and manipulation and just coming back to me." Jesus sounded as if he was pleading. "Women in general will find it difficult to turn from a man and stop demanding that he meet their needs, provide security, and protect their identity, and return to me. Men in general find it very hard to turn from the works of their hands, their own quests for power and security and significance, and return to me."

"I've always wondered why men have been in charge," Mack pondered. "Males seem to be the cause of so much of the pain in the world. They account for most of the crimes, and many of those are perpetrated against women and"--he paused--"children."

"Women," Jesus continued as he picked up a stone and skipped it, "turned from us to another relationship, while men turned to themselves and the ground."

In the briefest of scenes, we get a snapshot of traditional evangelical ideas about men and women, and it is suggested that women in particular decided to take on this subservient role for themselves. Women, this passage suggests, choose to depend on men for their identity. The analysis of men taking their identity from their work, I think, applies to both sexes in this day and age, and while this is Young's own roundabout way of critiquing traditional gender roles, he does it in a backhanded way when analyzing the woman's side of things, i.e., "Women shouldn't have chosen to accept that role to begin with."

Finally, the theological terms and concepts in this book are, as one Amazon reviewer put it, "picked up and dropped like the toys of a hyperactive child." And the author betrays his own knowledge of these concepts as he works a lot of philosophical phrases and insider terminology into the conversations. At times this weighs down or obscures the narrative: the book assumes an audience familiar enough with these concepts that they won't become lost, let alone understand them any better after each chapter's brief treatment of them. A few throwaway comments are made about Mack having attended seminary. That's convenient.

I was not impressed with The Shack. It's a different format that offers up some typical answers to hard theological questions. I'd only recommend it to people curious about the latest fad passing through Christian bookstores.
By Jeff Nelson
Email ThisBlogThis!Share to TwitterShare to FacebookShare to Pinterest
Labels: Reviews
Newer Post Older Post Home