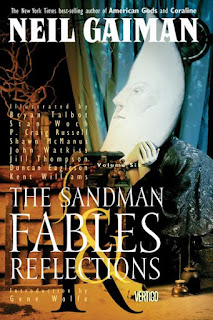 I read The Shack this week, and I think I've written enough about that already.

I'm back to the Sandman graphic novels now. I'm on Volume 6: Fables and Reflections. There's no overarching story in this one. Instead, most stories involve Morpheus interacting with people at different points in history: a spy during the French Revolution, Augustus Caesar, and so on. There is the introduction of Morpheus' son Orpheus, who gets his own story in this book as well.

This week's Entourage focused a lot on Turtle, which can be a good thing or a bad thing. Past Turtle-heavy episodes have involved him searching high and low for a special pair of sneakers, trying to qualify for medicinal marijuana, and being involved in a bet as to who could have a one night stand the fastest. In fact, Turtle is probably the most representative of this show's frat-boy vibe in all the stereotypical ways (not that there's anything wrong with frat boys). So anyway, it's Turtle's birthday and he's feeling down because people are buying him expensive gifts and he takes it to mean that he needs their help. For instance, both Vince and Jamie-Lynn Sigler buy him cars; he responds, "I couldn't have bought my own car?" Turtle's also been the most directionless character on the show, and it's as if he realizes it in this episode. Long story short, he decides to go back to school, thus continuing this season's developing arc that all four guys are branching out.

On a related note, Monday Night RAW has been having guest hosts the past few weeks. Those who regularly watch Sportscenter probably saw that Shaq was last Monday's host. Seth Green and ZZ Top have also done it, along with some injured or retired wrestlers. This Monday, Jeremy Piven--who coincidentally has a movie coming out--is guest host, and if he pulls out his Ari Gold schtick while interacting with the wrestlers I think it may just be one of the top ten best things ever.

I've listened to Guero by Beck this week, which is yet another mash-up of hip-hop, rock, folk, and whatever else he may have been feeling like on a particular day. I always enjoy Beck, and this was a good driving CD.

From around the web, here's a song about Kenya. Coffeeson has pajamas with lions on them that remind me of the lions in this video, so I sing this song whenever he wears them.