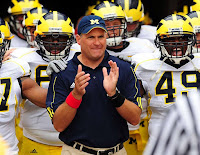 I got into an argument on Facebook the other day with some Buckeye fans. It wasn't really an argument...I voted in this online poll "Which is better, Ohio State or Michigan?" and there was an adjoining comment thread, with such witty banter from OSU fans as "App St." and "Rich Rod is a f**." Thankfully, there was actually more intelligent discussion happening as well, and I was dumb enough to give my two cents, knowing full well what little good could come of it.

It actually went fairly well. I exchanged a few comments with an OSU fan about history not really being on people's sides when they make comments that Michigan football is dead and buried based solely on the 2008 season, as if RichRod isn't eventually going to bring in his own recruits and build up his system, and based on his success despite typically poor showings his first year at each school at which he's coached.

A friend noted my comments, and made a comment of his own to me:

Michigan will come back when RR is gone and they actually hire Les Miles...RR's rise at WVU coinsided [sic] w/ the departure of Miami, Va Tech, and BC from the Big East.

Oh, really? So RichRod was merely a big fish in a small pond in the Big East, with no real big wins or competition to speak of? Let's do some detective work...

So while WVU never beat Miami with RichRod at the helm, they did beat Virginia Tech and Boston College several times each, along with several perennial powerhouses in bowl games, and shared the Big East Championship the last two years that those three teams were a part of the conference.

It is probably worth noting that some of his early teams had a home-and-home with Wisconsin, losing both times, but that shouldn't be seen as an indication of how generally RichRod's scheme will fare in the Big Ten, especially since Michigan's improbable win over Wisconsin was one of the few bright spots of the 2008 season.

So, what have we learned here today? We've learned that the "big fish, small pond" argument is bunk. This is shown both in and out of the conference while RichRod was head coach in the Big East. Whether Michigan can bounce back this year the way WVU did in 2002 remains to be seen, but it's going to, nay, has to get better. And history shows that it will.