John Piper Makes Me Rub My Eyes and Say, "Aaaaah" 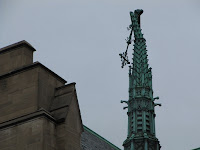 Via The Paris Project, I had the opportunity to read Reformed speaker/author John Piper react to a recent tornado touching down in Minneapolis the same day that the Evangelical Lutheran Church of America took its vote on the issue of accepting openly gay clergy:

"The tornado in Minneapolis was a gentle but firm warning to the ELCA and all of us: Turn from the approval of sin. Turn from the promotion of behaviors that lead to destruction. Reaffirm the great Lutheran heritage of allegiance to the truth and authority of Scripture. Turn back from distorting the grace of God into sensuality. Rejoice in the pardon of the cross of Christ and its power to transform left and right wing sinners."

I have several reactions to this, some of which are incredibly snarky.

First, one can find theological reactions like this to any sort of disastrous happening. Consider, for instance, Hurricane Katrina and the legions of prophets who came out of the woodwork proclaiming that it was God's judgment on New Orleans for its debauchery. Michael Spencer makes the same comparison, along with the observation that the French Quarter was left largely untouched. So maybe it was God's judgment on poor people for being lazy.

It's been notable to me that whenever these proclamations are made about such tragedies, it's by someone removed from the situation looking in and playing "Where's Waldo the Sinner?" God's judgment almost always happens where All Those Awful People Are Over There. I would have been interested in hearing whether anyone in the Lower Ninth Ward or in downtown Minneapolis had reached the same conclusion as the enlightened theologians comfortably watching from afar.

I do need to acknowledge that Piper is a Minneapolis pastor, but he's the exception that proves the rule. And it remains that his statement is about Those People Over There. If we just look hard enough for the people we don't like or disagree with, we can come up with an explanation for why these things happen.

Second, I'm reminded of an ill-advised argument that I got into a while back on the now-defunct Wesley Blog with a guy who shared his story of being in ministry, and getting caught one day in the middle of a drive-by shooting. He'd concluded that it was Satan trying to stop him from engaging in ministry. In a not-so-pastoral moment, I disagreed that such an event was set up just for him; that it seemed to be an incredibly self-centered view of the world, but that it did make sense to think that Satan did not cause the event but could use the event to breed discouragement.

When we consider the tornado, it is dubious to think that God inflicts suffering just to send a message to an individual or smaller contingent within the affected area, or that God afflicts someone with a disease to get at one of his or her relatives. The amount of suffering or the contingent that suffers rarely matches the alleged "message" being sent, such as the Katrina example above or Robertson and Falwell's explanation that God killed over 3000 people in New York to send a message to liberals and feminists. Piper argues that this tornado was very specific, and thus more of an indication that it was meant just for the ELCA. And yet other area businesses and homes were caught up in the destruction as well, not to mention another tornado striking an elementary school 50 miles away. Why didn't God just cause a power failure in the convention center or cause the entrance doors to stick? That would have been much more precise.  And what was happening at the elementary school that invited a second tornado?

Whether God causes suffering or works through suffering to enact redemption are two different things. In the former, God is vindictive and almost always leaves a lot of collateral damage. In the latter, God works out of a place of resurrection to bring strength and wholeness.

Finally, is all suffering caused by God? Is every child suffering from leukemia being punished? Or every person who is injured or killed in a car accident? Or every couple dealing with a miscarriage or stillbirth? Did the people of Rwanda do something to deserve genocide? If one dug deep enough in each instance, one could probably strain to twist something into a sin-related reason for the affliction to have occured. But how adequate would such an explanation be? And are you going to be the one who tells them?

Piper cites a passage from Luke that I do find applicable, but for different reasons:

Jesus: “Those eighteen on whom the tower in Siloam fell and killed them: do you think that they were worse offenders than all the others who lived in Jerusalem? No, I tell you; but unless you repent, you will all likewise perish.” (Luke 13:4-5)

His explanation is that the tower falling, and likewise the tornado, may not have been deliberate for the specific victims (which counters his whole argument about the ELCA), but is a reminder that we all need to repent or perish.

And yet, to begin with, Jesus doesn't offer an explanation for the tragedy. He explicitly states that the people killed by the tower weren't worse sinners than anyone else and we shouldn't make such conclusions. You know, like the conclusion that Piper makes about the tornado. Except it was a general message to repent, not just for them.

And once again, I rub my eyes and say, "Aaaaah..."
By Jeff Nelson
Email ThisBlogThis!Share to TwitterShare to FacebookShare to Pinterest
Labels: Theology
Newer Post Older Post Home