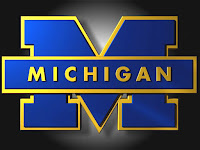 I woke up this morning in the usual way. I made the coffee. I got some breakfast for Coffeeson. I turned on the TV. And since there weren't any of Coffeeson's shows on yet, I turned it to Sportscenter, figuring that I'd watch it for just a couple minutes.

And then this happened:

The NCAA, which governs college athletics, has strict limits on how much time coaches can require players to spend on their sport. But Rodriguez's team has routinely broken the rules since he took over in January 2008, people inside the program told the Free Press.

Numerous players on the 2008 and 2009 teams said the program far exceeded limits intended to protect athletes from coaching excesses and to ensure fair competition.

I leave most of the analysis to people who know more about this than me, and who have more time to deal with it than me. And they've made some good points, such as:

These "violations" happen everywhere. They don't leak out publicly for two reasons.

1. The NCAA-mandated time limits for practices and workouts aren't exceeded in excess.

2. Players aren't motivated enough to speak out against their coaches and trainers.

Colleague Bruce Feldman recently conducted a confidential players' survey for ESPN The Magazine in which he asked players: What's the one thing that you never realized about being a college football player until you actually became one?

Almost all the players talked about it being a full-time job.

"I never understood that you were signing your life away when you sign [that Letter of Intent]," one FBS quarterback told Feldman. "They control everything you do: When you wake up, when you go to bed. I get told I'm going to birthday parties for kids. You don't have a choice. You have a dictatorship. Every time we don't show up to a voluntary workout, we've got [to run] stadiums and hills. And there's no money to show for it. You definitely don't realize it when you're getting recruited and they're being all nice to you."

And then there's this entire post at MGoBlog, which analyzes the rules and which may or may not have been violated.

I'm still digesting it all myself. I hate that this has tarnished the start of the season. I was ready to watch the start of the big comeback, and I get to hear and read about this this week instead.
By Jeff Nelson
Email ThisBlogThis!Share to TwitterShare to FacebookShare to Pinterest
Labels: Sports
Newer Post Older Post Home