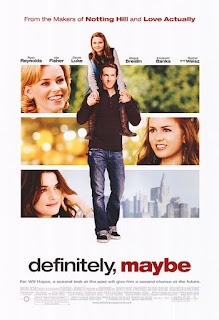 I started re-reading Leaving Church by Barbara Brown Taylor, but I'll have more to write about that in a few days. I was reading All That's Holy, an account of a road trip to encounter a wide variety of faiths. I may return to it, but I've been meaning to re-read Leaving Church and this felt like the right time.

We watched Definitely, Maybe this past week. Ryan Reynolds plays a soon-to-be-divorced dad telling his daughter the story of how he and her mom met. The bulk of the story takes place in the early '90s, as Reynolds' character works for the first Clinton presidential campaign in New York City. His love life swirls between three women: his college sweetheart (Elizabeth Banks), her former roommate and friend (Rachel Weisz), and a free spirit also working on the campaign (Isla Fisher). As he tells this story to his daughter, he changes names to get her to guess which one turns out to be her mom. There's also a humorous early-'90s sentimentality, such as references to Kurt Cobain and the rise of cellphones. It's a cute story.

Entourage seems to be treading water at the moment. One of the main overarching stories is Eric's on-again, off-again relationship with an old girlfriend. A few weeks ago, he finally got fed up with waiting for her and has been with one of his neighbors ever since. So this past week, his ex once again pops into the picture as the co-organizer of a celebrity golf tournament (Hey look, it's Mark Wahlberg and Tom Brady and Jeffrey Tambor!), where the head of a major management company asks Eric to come work for him. Eric turns him down after finding out that his ex set it up, accusing her of trying to make him "acceptable" before coming back to him. This doesn't go very well. And this has been one of the main stories this season. I thought it'd be more of "the boys are branching out," but they all seem to be sticking pretty close to Vince and his success.

From around the web, here's another graph from GraphJam that I thought was timely: