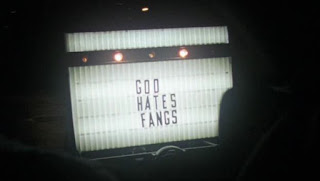 It's a sign! Or not. Michael Spencer has a lot to say about John Piper's tornado commentary, including this:

It’s an evangelical specialty to jump in and out of the scientific world view as needed. It really irks me. One moment we sound like people who have no idea what storms and earthquakes are all about meteorologically and geologically then the next minute we’re off to the doctor to get more of the benefits of medical science with no reference to God’s decision about whether we should get well or not. I know these understandings of reality aren’t exclusive, but who is your audience when you talk about a storm in language not too far off from animism and then next minute you’re looking down your nose at someone who says that grandma’s blindness is caused by demonic attack, not macular degeneration?

We’re just fine telling kids that God sends X and causes Y, but if our children are scared of that God and don’t want to cross the bridge or go to sleep during a storm we tell them that everything is OK. How does that work? If you say that storms are the result of the way the atmosphere operates as a system and that bridges hold up if the engineers build and maintain them right are we confusing the kid, contradicting ourselves or just operating in two entirely different universes.

If we are going to start saying that comets and eclipses and asteroid strikes are messages from God, then I think we owe it to someone to explain how that interacts with the fact that we also understand these things scientifically.

Exactly. John Piper's tornado is a sign from God if we ignore the weather patterns tracked that day, the second tornado that ripped the roof of an elementary school 50 miles away, downplay the fact that this is simply the time of year for tornado-producing systems in the Midwest, and the general factors that lead to tornadoes to begin with. No, if we just focus in on the ELCA's plans for that day and point out that the tornado broke a church steeple, that's all we need.

What I appreciate about Spencer's commentary here is that it doesn't need to be this dualistic. People of faith should pursue a holistic worldview, incorporating theology and science, rather than deciding that this was God's judgment, and this other thing was the result of the weather.

A Death Panel By Another Name: Jan at A Church for Starving Artists bypasses the absurd claim about "death panels" being bandied about in the current health care debate, by pointing out that they already exist:

Insurance Companies already sit in judgment deciding who will live and who will not live, who will be relieved and who will not, who will get surgery and expensive meds and who won’t. They base their assessments on several factors from pre-existing conditions to lifetime spending caps.

Businesses (and churches) which do not provide health insurance for their paid workers are part of the Death Panel chain: we make it possible for our people to receive the most basic preventative health care. Or not.

Let's be honest: insurance companies are more about protecting their bottom line than helping you get better. So if you have a chronic condition, you're out. If you can't afford their co-pays or premiums, you're out. If you exceed their cap, you're out. It makes sense. Not to mention rises in such rates or new lists issued every month as to what is or isn't covered.