"Wisdom Calling" - A Sermon for August 16 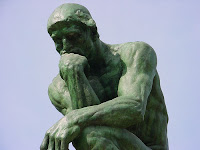 There’s a movie that came out a few years ago called Idiocracy, where two subjects of an Army sleep experiment who end up sleeping for 500 years. When they wake up, they find that somehow the world is completely populated by morons.

Crowds are easily riled up and manipulated by someone yelling or by explosions. There’s a courtroom scene that looks more like a Jerry Springer episode than a place of reasonable judgment.

A Gatorade-type corporation has taken over the FDA and heavily influenced what people eat (even used to irrigate crops, and people wonder why nothing will grow).

We also find that Costco has become as big as a city and that most chain restaurants now feature prostitution.

This future world is excessive, violent, overtaken by a handful of corporations, and the population has become so incredibly lazy that they're unable to consider what's really happening. It’s a place where wisdom is absent.

Many things might come to mind when the word “wisdom” is mentioned. We may think of right judgment, or discernment, or knowledge, or common sense. All of these may be used to describe wisdom, or at least some aspect of wisdom.

We may be able to think of specific people whom we think of as being wise. What about them do we consider wise? What sorts of characteristics or actions do we see them having or doing that makes them wise?

We may think of them as being incredibly seasoned by life – they’ve experienced so much and can offer advice out of that experience. When they talk, they aren’t just talking – they’re saying something.

We may think of them as having an incredible common sense; a knowledge of what works in a given situation.

We may think of them as more deliberate in their thoughts and actions – more hesitant where, as the saying goes, “fools rush in.”

However people whom we consider wise may exhibit that wisdom, we may simply be able to point at them and say, “Whatever wisdom is, they’ve got it.” And what if we didn’t have people like that around? What would a world without wisdom look like?

This passage from Proverbs doesn’t exactly give a definition, but it does give a description.

First, wisdom is depicted as a woman in this passage, as Proverbs does several other times. It’s not meant to be taken literally, but a helpful metaphor regardless. Wisdom has built her house and is preparing a feast. And the house has seven pillars, a reference to creation: God setting the world on pillars in Genesis and the allusion to seven days.

So wisdom is tied to creation; what God truly intends creation to be. God created the world with wisdom, with a certain pattern of order and goodness, and a sense of God’s presence. God used this wisdom to create the universe, and with this wisdom that God continues to move through it. And she’s inviting anyone and everyone to this feast: “You that are simple, turn in here! Come, eat of my bread and drink of the wine I have mixed. Lay aside immaturity, and live, and walk in the way of insight.”

There’s something about that word “simple” – a word sometimes used to describe people who’ve done something unwise. But specifically when we talk about a person or action being simple, there’s something being implied about the inability to consider anything very complex.

The “simple” person to whom Wisdom is calling always wants to do what is easy, or most convenient, or acts out of desire, lust, hunger, laziness. Like the world of Idiocracy, is perhaps more apt to solve problems with violence or out of a place of emotion with no reason to balance it out; decisions based on what is popular or the feel of the crowd at any given moment.

This could also be known as the house of Folly described later in this chapter of Proverbs: people are invited in to eat and drink, not knowing that “the dead are there.” There’s something about a world without wisdom that features death; that isn’t life-giving – that is only destructive. We see one vision of that world in Idiocracy, but we can easily spot real-life visions of it as well.

Whenever we see or hear news about the millions upon millions of children throughout the world who are starving, we see glimpses of a world without wisdom.

Where it’s estimated that 12.3 million people worldwide are trapped in underground human trafficking in various kinds of forced labor, we see glimpses of a world without wisdom.

Where there is genocide or ethnic cleansing; countries carrying on decades or centuries-old wars because of religious or ethnic differences, we see glimpses of a world without wisdom.

Where governments or corporations consider the bottom line much much more than human lives, we see glimpses of a world without wisdom.

The house, the world, of wisdom is much different. People who are called in to eat, to lay aside immaturity and simpleness, are also invited to live. Wisdom is life-giving – there’s a reason she’s connected to creation in this passage.

A world with wisdom, God’s wisdom, is a world constantly beckoning to us: “You that are simple, turn in here! Come, eat of my bread and drink of the wine I have mixed. Lay aside immaturity, and live, and walk in the way of insight.”

Lay aside violence as the first option, and walk in the way of peace.

Lay aside seeing other people as objects to be used, and walk in the way of compassion.

Lay aside prejudice of all kinds, and walk in the way of loving your neighbor.

Lay aside greed, and walk in the way of self-control so that others may live.