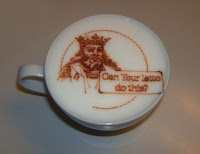 Via iMonk, I found this long book quote on Tim Challies' site offering up the usual list of what critics deem emergent:

After reading nearly five thousand pages of emerging-church literature, I have no doubt that the emerging church, while loosely defined and far from uniform, can be described and critiqued as a diverse, but recognizable, movement. You might be an emergent Christian: if you listen to U2, Moby, and Johnny Cash’s Hurt (sometimes in church), use sermon illustrations from The Sopranos, drink lattes in the afternoon and Guinness in the evenings, and always use a Mac; if your reading list consists primarily of Stanley Hauerwas, Henri Nouwen, N. T. Wright, Stan Grenz, Dallas Willard, Brennan Manning, Jim Wallis, Frederick Buechner, David Bosch, John Howard Yoder, Wendell Berry, Nancy Murphy, John Franke, Walter Winks and Lesslie Newbigin (not to mention McLaren, Pagitt, Bell, etc.) and your sparring partners include D. A. Carson, John Calvin, Martyn Lloyd-Jones, and Wayne Grudem; if your idea of quintessential Christian discipleship is Mother Teresa, Martin Luther King Jr., Nelson Mandela, or Desmond Tutu; if you don’t like George W. Bush or institutions or big business or capitalism or Left Behind Christianity; if your political concerns are poverty, AIDS, imperialism, war-mongering, CEO salaries, consumerism, global warming, racism, and oppression and not so much abortion and gay marriage; if you are into bohemian, goth, rave, or indie; if you talk about the myth of redemptive violence and the myth of certainty; if you lie awake at night having nightmares about all the ways modernism has ruined your life; if you love the Bible as a beautiful, inspiring collection of works that lead us into the mystery of God but is not inerrant; if you search for truth but aren’t sure it can be found; if you’ve ever been to a church with prayer labyrinths, candles, Play-Doh, chalk-drawings, couches, or beanbags (your youth group doesn’t count); if you loathe words like linear, propositional, rational, machine, and hierarchy and use words like ancient-future, jazz, mosaic, matrix, missional, vintage, and dance; if you grew up in a very conservative Christian home that in retrospect seems legalistic, naive, and rigid; if you support women in all levels of ministry, prioritize urban over suburban, and like your theology narrative instead of systematic; if you disbelieve in any sacred-secular divide; if you want to be the church and not just go to church; if you long for a community that is relational, tribal, and primal like a river or a garden; if you believe doctrine gets in the way of an interactive relationship with Jesus; if you believe who goes to hell is no one’s business and no one may be there anyway; if you believe salvation has a little to do with atoning for guilt and a lot to do with bringing the whole creation back into shalom with its Maker; if you believe following Jesus is not believing the right things but living the right way; if it really bugs you when people talk about going to heaven instead of heaven coming to us; if you disdain monological, didactic preaching; if you use the word “story” in all your propositions about postmodernism—if all or most of this tortuously long sentence describes you, then you might be an emergent Christian.

At least half of this list applies to me. But I didn't realize that tastes in music, drinks, and beanbag chairs constituted being emergent. Granted, a lot of emergent authors and speakers cite U2 ad nauseum, but so do...oh, I don't know...U2 fans. People who like lattes and Guinness drink lattes and Guinness. What's that have to do with emergent? So evangelicals or Calvinists or Baptists (heh) don't drink those things?

As for the theological ideas mentioned, as well as what amounts to their broader application to political issues, I can see how the author might have been trying to imply that the emergent movement is the Democratic Party at prayer. This could be said of most "liberal" Christianity: every time I attend General Synod, it feels this way at times. But gee, there are other issues that Christians should be concerned about besides, according to evangelicals, The Big Two. Since when is "following Jesus is living the right way" a bad thing? Or being the church instead of going to church? After all, the book this quote comes from is entitled Why We're Not Emergent. So these guys aren't emergent because they'd rather go to church than be the church, believe stuff about Jesus instead of follow Jesus, only care about two political issues, and they don't like Guinness?

This is why I've always been somewhat perplexed at the critiques of themes raised by emergent. First off, all the cheap jabs about goatees and lattes are useless...what, nobody liked those things before emergent Christianity came along?

Second, I don't understand the disagreement with issues such as caring about poverty, actually reading the Gospels as often as (if not more often than) Paul, seeking relational community, and many of the other things listed. I get the doctrinal disagreements about the nature of the Bible, but disagreeing with some of the other stuff seems absurd, and even makes the one disagreeing look bad, i.e., "Christians shouldn't care that much about AIDS. Only those liberal emergent people do." That's effectively what's being said.

But hey, maybe this list is in fun, like Jeff Foxworthy for Christians. Given the context of the quote, it seems to be in fun at emergent's expense, but maybe emergent folks can laugh as well. Maybe people who take offense are just taking this too seriously.

Yeah, maybe. Or maybe there's a more worthwhile way to dialogue with the movement than creating lists like these...or at least discerning what's really worth including in them.
By Jeff Nelson
Email ThisBlogThis!Share to TwitterShare to FacebookShare to Pinterest
Labels: Church, Justice Issues, Linkage, Theology
Newer Post Older Post Home