The College Football Weekend That Was 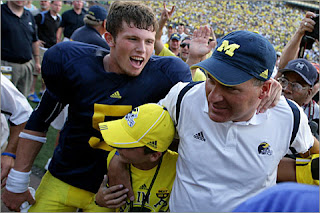 On Saturday afternoon around 4:00 p.m., my family and I began the drive home from my in-laws' house in Cincinnati. We had breezed in to town for 24 hours or so for my sister-in-law's wedding shower. It's about a 3 1/2-hour drive, and given that Michigan and Notre Dame began playing at 3:30, I knew that I would miss the entire thing.

My brother and I call each other a couple times every fall Saturday afternoon to issue quick thoughts on Michigan's performance. Last Saturday during the first half of the Western Michigan game, it mostly consisted of comments like, "Hey, isn't it nice to watch a football team really play football again?" This past Saturday, I would need to rely on him for every update, every score and, hopefully, eventual news of a Wolverine win.

Leading up to the game, that last part was not a sure thing by any means. Even though Michigan had begun the season in strong fashion, they're still young with questionable depth at some spots. On the other hand, as much crap as Charlie Weis gets, he'd be returning a veteran team with some excellent playmakers. This wouldn't be an easy afternoon either way.

But the statement that Michigan could make with a win would go a long way in getting the huge monkey off their collective backs. It was one thing to beat up on a MAC team, though even that was not an easy, surefire thing last year. It would be another to beat Notre Dame. So I drove, my ears listening for my cell's ringtone amidst the sounds of Elmo's World on the DVD player. Back and forth, back and forth...with each score, with each new lead, I wondered...would a moral victory be enough? If Michigan merely kept it close, would I be able to feel good about that? After all, this was still a rebuilding time, and even a close game would signal an ability to at least hang with tougher teams. They'd probably still be able to get out of September 3-1.

No. I wasn't going to let myself settle for that. Under Carr, I would've settled for that. His impact on the Michigan culture in his latter years apparently was such that moral victories and close losses would be okay. And I'd bought into it, even after 2008, even this early in the new season. Yeah, sure, a close game with Notre Dame. We would've all been happy with that. It'd be a sign of progress. Except I didn't really believe it any more. Michigan had to win this game. Not only that, but they were GOING TO WIN. Yes, I'm telling you, I thought that. I was waiting for the phone call from my brother that would bring news of a new Michigan lead, the final lead of the game. And then my phone rang...

"Forcier threw to Mathews for a touchdown with 11 seconds to go."

I laughed an ecstatic, maniacal laugh. My faith had held up. This was truly a statement win, the first big win for the RichRod era, bigger than last year's Wisconsin game. It had featured a young quarterback cool under pressure and a coach whose regime was starting to produce wonderful, exciting results. The ghosts of the late Carr era were being continually exorcised, and the burdens put upon the program the entire off-season, all the lingering questions after 2008 and ridiculous accusations about practice hours, were beginning to give way.

There was another football game that was played on Saturday night. It was the marquee game of the day, the rematch between Ohio State and USC. The Buckeyes had plenty of their own questions and burdens and ghosts heading into this game, and the atmosphere that I witnessed in the Horseshoe was evidence enough that they were determined to answer them all. The fans were ridiculously loud, the Trojans seemed off during the first half. Perhaps Matt Barkley was rattled more than his pre-game interviews had suggested. By the end of the first half, USC had mustered a measly field goal to tie the game, and I was getting too sleepy to watch much more.

During the halftime report, I was able to see the Forcier-Mathews play for the first time. It was the very first thing that they talked about. I smiled contently as I further rode the joy of the day. And even though it looked like Ohio State was going to finally answer their critics, it didn't matter to me nearly as much as the celebration at the Big House.

I woke up on Sunday morning and turned on Sportscenter. It was a few minutes in, but once again all I saw were winged helmets, Mathews again catching Forcier's pass, 108,000 Michigan fans going crazy. The commentators talked about the amazing comeback, in particular praising the level-headedness of a freshman quarterback in such a situation. And they used that as the segway to USC/OSU, where it was shown that Barkley had eventually calmed down enough to lead the Trojans to a 18-15 win. This after a high snap to the USC kicker for a safety, among other boneheaded miscues. No, the Buckeyes had still lost.

After last year's OSU/USC game, I posed a question to my Buckeye readership: "Do you think that Jim Tressel's days as head coach are numbered?" At that time, there didn't seem to be much worry. But now, it seems as if that worm is turning:

When I watched the game live, I was struck by what I considered poor playcalling and mediocre execution. But after watching the game again in detail, going over replays and studying all the players, I'm convinced the situation in Columbus is nearly hopeless. For all the talk of Tressel's buttoned-down, conservative approach, and how his teams don't make mistakes, the most basic and fundamental errors permeated throughout Ohio State's offensive plan like cancer in its late stages, and the only conclusion I could draw from this game is that Tressel -- whatever he may be as a motivator, a recruiter, a teacher of technique or as a disciplinarian -- is not up to the challenge of leading his team past others that equal his in talent. He is not good enough of a tactician to win against the national elite who, unlike practically everyone he schemes against in his conference, have the talent to match Ohio State's, and those are the only games where coaching really matters. With his facilities, talent, and resources, winning the Big Ten is not the test.

Look at the numbers. Ohio State's failure to beat a quality opponent since defeating Michigan to punch a ticket to the national championship game in 2006, Tressel's teams have been outclassed, outsmarted, outplayed and outprepared in every big game they've played.

This article was not written by a Buckeye fan. But I found it through a Buckeye fan friend on Facebook who declared himself "off the Tressel bandwagon." I truly wonder what lies in store for that program in the next few years, especially due to the so-called Team Up North finding a new swagger. Things are changing, and there seem to be some doubts rising about whether the Buckeyes in their current incarnation will be able to keep up.

Regardless, I wore my Michigan tie to church that morning. Nobody said a word.
By Jeff Nelson
Email ThisBlogThis!Share to TwitterShare to FacebookShare to Pinterest
Labels: Sports
Newer Post Older Post Home