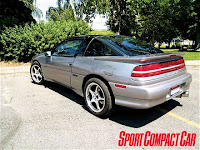 Before my sophomore year of college, I bought my first car. It was a gold 1991 Mitsubishi Eclipse. It had standard transmission, which I hadn't yet really learned, but I was willing to do so for the sake of driving this car...during breaks for a summer college course I was taking, I'd go out and just make loops around the parking lot. It had a sun roof, CD player, and the stick shift had an orange light on the top of it that lit up when you'd turn on the headlights. This may not sound all that exciting, but it was to a 19-year-old kid with his first ride.

The next summer, I drove down to Cincinnati to see my first Dave Matthews Band concert with She-Who-Would-Eventually-Be-Coffeewife. As I was looking for the street to her house, I lingered too long on a sign that I'd passed, and when I turned back to the front I realized that I was about to be in the next car's trunk. The front of my car folded like an accordian, and I spent my summer earnings getting it fixed.

The car never seemed to be the same after that. The next few years I would need to replace the clutch and fix the brakes several times. The novelty stick shift eventually broke. The gas cap door snapped off in my hand during a winter day and I had to get a locking cap. The summer before seminary I again dumped all my earnings into it, and by the time I got to St. Louis it had already become a shell of it's former awesomeness. I eventually donated it to the Salvation Army, who had to come tow it out of the parking lot because it no longer ran.

This car has turned up in my dreams the past few nights. Along with it has come snippets of memories of days' past, mostly of college and some of the notable spots from that season of my life. I'm inclined to believe that these dreams are somehow tied to the beginning of fall, a time when students arrive or return, triggering something in my subconscious to relive those days.

But the constant has been the car. It's been ever-present no matter what else I've been reliving. But I guess I need some way of getting around. And for that, a working version of my first four-wheeled symbol of independence is perfect.
By Jeff Nelson
Email ThisBlogThis!Share to TwitterShare to FacebookShare to Pinterest
Labels: For No Particular Reason
Newer Post Older Post Home