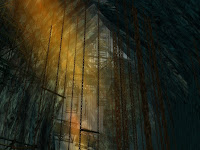 I've been giving thanks for changing leaves, for the chill in the air, for the gradual disappearance of all traces of summer. I relish the ideas of long sleeves and Halloween decorations. I wish that October was looming larger on the chronological horizon than it currently is, but I take some solace in the signs of its arrival.

I come home from the church to reheat some leftover pizza. My mom watches Coffeeson on Wednesdays, and the two of them were preparing for lunch of their own when I walked in the door. As I wait for the oven to heat up, I sit to check e-mail and read a few pieces on Michigan's expectations for the rest of the season. Tate Forcier appears in the corner of the newest Sports Illustrated. He's clearly established himself. I smile to myself, thankful that that particular aspect of fall is shaping up pretty well this time around.

I'm pulled away by something my mom says. She mentions that the pastor of my former/home church has a funeral tomorrow. I ask who, and she mentions a name that I recognize but can't quite place. "He was married a couple years ago...I think [Pastor] had done it."

When she gives the bride's name, I figure it out. He was the groom in the very first wedding I'd helped officiate during my two-month stint at my hometown church. I hadn't been ordained at the time, so an ordained colleague had been called in to handle the official parts.

I start to remember things about that weekend. I didn't know this couple; that weekend was the only time we'd ever met. During the rehearsal, he'd worn a black t-shirt with a tuxedo printed on the front. After we'd finished running through the ceremony, he'd taken a moment to thank everyone for being a part of this special moment in their lives. The bride was of Laotian descent, and I'd met the U.S. Ambassador to Laos at the reception, which I thought was pretty cool.

Just over five years later, the groom had shot himself. It's a tragic ending no matter how you slice it. The only time I'd ever met this person was during one of the happiest moments of his life. I sit with this the rest of the afternoon, and I have some thoughts of stopping by calling hours. Would they remember me? Would it make a difference? And why exactly was I thinking of going?

I come home from the church, done for the day. My sermon, based on the unconventional Wisdom of Solomon text that the lectionary includes, is imperfect but functional. There will probably be more tweaking. The wicked person lies in wait for the righteous man, saying, "he is inconvenient to us...let us test his resolve and his faith." The miserable one wants to spread his misery around. I find it relevant to our modern age and the cynicism that has made itself known time and time again.

Could we possibly imagine a different kind of world? Could we possibly dare to envision a society that isn't based on inequality, on misery, on marginalizing those who do dream of a more hopeful reality?

When I get home, I flip open the laptop and click on Street Prophets. One of the top stories brings further news of tragedy:

ANDERSON, S.C. — Friends of a 39-year-old South Carolina man are trying to figure out why he never reached out for help before dying broke and alone in a zipped-up tent on the banks of a lake.

Bright but reclusive Civil War buff David Condon lost his job at a local museum and fell behind on his rent.

Sometime in early July he disappeared. On Labor Day weekend, a group of college kids vacationing at a condo complex a few hundred yards from his tent peeked inside and found his body. The local coroner says he died of pneumonia, made worse by malnutrition. He was dehydrated and had lost 50 pounds in a few months.

His best friend, Craig Drennon, saw no sign Condon was having money problems or spiraling into despair when the two got together nearly every week to drink beers and play backgammon.

What happened to Condon is about as authentically American an ending in 2009 as one can have, dying homeless, hungry, & mentally & physically wasted at the edge of a wealthy society that extolls self-reliance over all other personal qualities, advertises "a dollar & a dream," begrudges providing basic health care to all its citizens & won't even crack down on a financial industry that rewards failure with multi-million dollar bonuses.

I start wondering about the connection here between my Wisdom of Solomon text and this story; whether a man dying alone, broke, and hungry in a tent would have anything to say to the wicked person described in the passage who find people trying to change the former's situation to be "a burden" and "inconvenient." I try to imagine this man's embarrassment; his reluctance to share his situation with his friends. I think about trying to hold it together myself in such a situation.

My reflections on the news of the day are interrupted by the sounds of Coffeeson waking up from his nap. He's still tired when I pick him up; all he wants to do is lay his head on my shoulder, to take his time waking up. After what I've heard about, I'm content to hold him, knowing that he won't be able to avoid life's harder moments. He'll know loss, he'll experience humanity's unfairness and cruelty, he'll wrestle with questions of where hope and reassurance can be found in a world that includes these darker moments. And I pray that he'll be able to envision and work for a better world in the midst of it all.

I sit down with Coffeeson on my lap, and he nestles in, still not quite ready to awake fully. On Monday, I'd spent an hour and a half rocking him while he slept. To be honest, I was annoyed that I wasn't able to do something else: couldn't read a book, couldn't relax on the couch, couldn't take a nap myself.

Today, I'm not in a hurry. Take as long as you like.
By Jeff Nelson
Email ThisBlogThis!Share to TwitterShare to FacebookShare to Pinterest
Labels: Bible, Fatherhood, Justice Issues, Quotidian
Newer Post Older Post Home