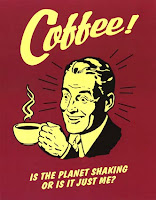 I would be remiss if this blog didn't acknowledge National Coffee Day:

Did you know that coffee dates as far back as the 9th century? It was first discovered in Ethiopia by a goat herder named Kaldi. He noticed the stimulating effects that the coffee berries had on his goats and began to experiment with them.

A century later, coffee began being roasted and traded by Arabs. From there, the beans entered Indian and European markets and the first coffee shop opened in Constantinople in 1475. From there, coffee's popularity grew at an exponential rate.

I did in fact trek to my favorite coffeehouse today, but they didn't seem to acknowledge this date. So I had to go ahead and pay for my java.

The name of the goat herder is especially interesting to me, as my favorite coffeehouse in St. Louis was called Kaldi's. I certainly recommend it if you're ever in the area.

So a Happy National Coffee Day from Philosophy Over Coffee.
By Jeff Nelson
Email ThisBlogThis!Share to TwitterShare to FacebookShare to Pinterest
Labels: For No Particular Reason
Newer Post Older Post Home