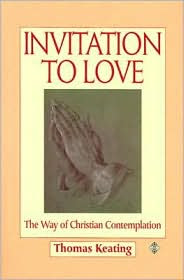 I've been continuing to read Keating's Invitation to Love, which I think has gotten better. He tells the story of Bernie, a fellow monk who was very unconventional in contrast with the typical practices of the Trappists. He went out of his way to greet his fellow monks despite the rules about silence (to which Keating adds, "After a while I just tried to avoid him"). He would look for and appreciate the divine presence in all creation rather than just in prayer and other spiritual disciplines. He eventually became a cook in another monastery, which was a great place for him to continue showing hospitality. This chapter so far is my favorite, and I'm hardly doing it justice here. Keating is much more appealing to me when he's sharing personal narratives and reflections like this.

I've also been reading Advent Conspiracy, the subtitle of which is "Can Christmas Still Change the World?" Yes, I'm reading Advent books already. I always do, to collect new ideas for how to preach the familiar themes of the season. Anyway, the three authors here make observations about the ridiculous consumerism that runs rampant leading up to Christmas, and advocates both reflecting on how Jesus would truly have us mark this season, as well as making specific suggestions: spending less or spending on specific things or from specific companies such as those with fair trade philosophies. They begin with a theological point about worship: what are we truly worshipping around Christmastime when we're spending so much time, energy, and money on expensive gifts? Specifically, the Advent Conspiracy advocates for Living Water International, which helps provide clean water for poorer countries.

I haven't watched LA Ink in a while. I've watched enough to know that Kat's new shop manager, Aubrey, is rubbing everyone the wrong way: she goofs off, she skips work at times, she doesn't have a clue when it comes to setting up artists' workstations, she oversteps boundaries with customers, and her personality is generally grating. Anyway, there were three episodes on in a row leading up to the season finale last night, during which Corey finally decides that he's done putting up with Aubrey and seems to issue an ultimatum to Kat...and then the episode ends! I thought this arc would be resolved last night, but now we have to wait until the next season! Bah.

I've also continued to watch Entourage, which had a lot of things develop this past week. Ari's old estranged mentor proposed that Ari buy him out (we later find out that it's due to his pending divorce). Jamie Lynn-Sigler breaks up with Turtle due to not wanting a long-distance relationship while she's working overseas. Drama and Eric both have health scares. And Vince? He has an easy-going personality and has sex with random women. So after last season when Vince had more of a personality while his career was on rocky ground, he turns back into a mannequin when his career rights itself. It's been kind of a meandering season anyway. Vince's buddies have branched out, which I thought would be a major theme, but Vince himself hasn't done much of anything besides have sex with a different person in every episode. No, seriously. He picks up a different girl almost every week. And yet Eric was the one this past week getting tested for venereal diseases. They could do a theme next season where one of these women winds up pregnant and Vince has to deal with the fallout. HOLLYWOOD SCANDAL~!

Around the web, Brant is back writing at Letters from Kamp Krusty.
By Jeff Nelson
Email ThisBlogThis!Share to TwitterShare to FacebookShare to Pinterest
Labels: Pop Culture Roundup
Newer Post Older Post Home