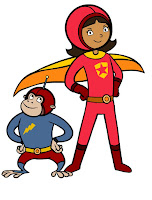 I just began reading Home by Marilynne Robinson last night. This is basically the story of Gilead from the perspective of Glory, Boughton's daughter and Jack's sister. It's written in a more conventional style, as opposed to the journal-entry style of Gilead. I'm not very far into it at this point, but the book first gives some backstory to the Boughton family and Glory's thoughts of being back in Gilead to care for her father...so far she doesn't strike me as the most cheery or optimistic person. Maybe that will change.

I've also continued to read Keating's Invitation to Love, and I've made it through chapter 15 in accordance with my book study's assignment. Keating reflects on the Night of Sense, during which the emotional high of initial spiritual awakening starts to give way and the individual must more deeply internalize its meaning. He also reflects on the experiences of St. Anthony traveling into the wilderness to face demonic forces. I've gotten a lot more out of this book after the first couple chapters.

This past week we watched A Cinderella Story, but I'm not sure why. It started playing on Disney or ABCFamily before Coffeeson went to bed, and we wanted something "safe" playing on TV while he was still awake. But then even after he was put to bed, we ended up watching the rest. It's your typical "be yourself" story set in high school, with Hilary Duff playing the part of the girl being mistreated by her stepfamily. The "prince" is the popular jockboy who is also struggling to be himself in the midst of the superficial popular crowd, and even with his own father who seemingly has his son's college and career choices already planned out for him. Yadda yadda yadda happy ending.

Wordgirl is one of the many shows that Coffeeson watches on a typical day. I single it out because it has a certain "Rocky and Bullwinkle" humor to it that makes it appealing to adults as well. The show is all about a girl named Becky, who transforms into WordGirl to combat bad guys such as Lady Redundant Woman, The Whammer, Chuck the Evil Sandwich-Making Guy, and Dr. Two-Brains, all while defining a few big words in each episode. I was surprised when I looked up the voice cast, which includes Chris Parnell, Maria Bamford, Jeffrey Tambor, John C. McGinley, and Patton Oswalt. I don't really mind any of Coffeeson's shows, but this is one that I especially like to watch with him.

From around the web, here are quadruplets laughing: