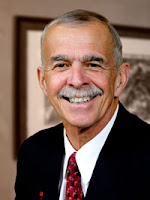 Rev. Steve Sterner, Executive Minister for Local Church Ministries for the United Church of Christ, reported to the board that "existing churches" could stand to learn some things from "emerging churches:"

In his report to the UCC's Local Church Ministries board Oct. 23, the Rev. Steve Sterner looked back on two years as LCM's Executive Minister and charted a future for relationships with local congregations that serve two expressions of the church: "existing" and "emergent" churches.

"The Existing Church is far and away the largest partner in our mission from a numerical perspective," Sterner said. He expressed that the existing church:

is interested in perpetuating where it is, or where its memory is.
has members. Membership requirements are few.
supports the wider church out of historic obligation.
looks to the denomination for resources for its life.
has lots of committees that focus on programs.
is often pastor- or program-driven.
draws its identity from historic denominational theology and practices.
sees technology as a tool to be used.

is interested in moving to where its vision is.
is mission driven.
has less interest in structure and more in relational communities.
draws its identity from multiple connections and partnerships.
has "disciples" rather than "members." There are expectations for being a disciple.
doesn't only "use" technology, but sees technology as part of its ethos.
is drawn to networks and relationships more than historical ties.

"I can't say this strongly enough: these are to some extent characterizations to make a point," Sterner said. "These are not criticisms. They are descriptions. These are only examples from a long list of descriptive possibilities."

Sterner said that LCM needs "to be attentive to both of these churches—new and emerging. We need to balance our staffing and our budget in appropriate ways in support of both." Increasingly, though, "the scales will be tilting to the emerging church" as new congregations grow and established congregations renew their life and become more like "emergent" churches.

People even in "existing churches" may look at this and say, "Well, duh," but the sorts of things that Rev. Sterner is talking about most likely will entail a major overhaul of a church's thinking and culture. For instance, many may argue that they are being faithful disciples, but every description that they provide for what constitutes discipleship relates to their involvement as a church member.

Rev. Sterner is also describing a post-denominational reality, where churches are identifying more and more with multiple networks and communities.

I think it's very important for the UCC to be talking about this at the national level. Continuing to be honest with ourselves about what truly works and what doesn't, what will inspire discipleship and what will just be propping up the institution, will help us face the future with our mind on transformation rather than survival. This includes the denomination as a whole and not just local churches.
By Jeff Nelson
Email ThisBlogThis!Share to TwitterShare to FacebookShare to Pinterest
Labels: United Church of Christ
Newer Post Older Post Home