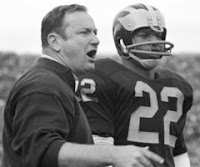 I'd hoped to finish Home this week, but I still have about 100 pages to go. Lately, Ames' family has been present more, with Jack wanting to play catch with Robby and Rev. Ames giving Jack lots of disapproving looks. Since this is from Glory's point of view, there is only interaction between Jack and Ames when the Ameses visit the Boughtons, although we get more of Jack's side. In particular, we discover that Jack really wants to make an effort to win Ames' approval. He's a much more sympathetic character in this book. Or at least is sympathetic more throughout.

The week of The Game, ESPNClassic always shows a handful of past games. The very first that they showed this year was the 1969 game, which was Bo's first. With this year being the 40th anniversary of that game, I made it a point to sit down and watch. Boy am I glad Michigan doesn't do the helmet sticker thing any more. Later in the day, the 1995 game was on, during which Biakabatuka ran all over the Buckeyes (also, it was Carr's first Game after Moeller had to abruptly be let go). In both games, Ohio State came to the Big House as the overwhelming favorite, and Michigan was able to do a bunch of stuff that caught them off-guard and led to convincing wins. It gives me hope that that sort of thing is at least possible. Possible this year? I'm trying not to let my hopes get too high.

Internet Monk has an interview up with Mike Mercer, who is a hospice chaplain. The main concern of the interview is a model--or lack thereof--of pastoral care for the dying and grieving in evangelical churches. Even with that focus, I found it informative for "mainline/oldline" types as well because many of the concerns and things to be improved in our traditions are actually similar, in my experience. So go check it out.

Here's the video for "You and Me" by Dave Matthews Band, which has a cute little concept to it. I suppose that the main reason I post it is due to my surprise at the inclusion of Tim Reynolds, Jeff Coffin, and Rashawn Ross, who have been touring members and who all contributed to Big Whiskey, but whom I didn't think were permanent members. Their inclusion in this seems to give a strong indication that they're at least moving in that direction. Or not.