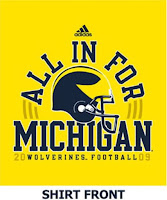 Since Michigan's 4-0 start in September, which included an instantly classic win over Notre Dame, they've gone 1-6. That one win was a blowout against an extra-sweet cupcake team, which was an enjoyable Saturday spent at the Big House, but we knew the outcome back when the game was scheduled.

But back to the Notre Dame game. After that win, the fanbase began licking its lips for what this season could possibly bring. There began talk of going 8-4 or 9-3 and a New Year's bowl. Their 3-9 record from the previous season was becoming more and more of a distant memory.

Then they started losing. They lost close games to Sparty and Iowa, but then just fell apart four weeks in a row.

And as early as the Iowa loss, some different talk began. It was talk about how RichRod probably can't get it done after all. More and more people began calling for his head. Back-to-back losses to teams they probably should've beaten didn't help. This talk has persisted up to this point, and there is likely a long year of it ahead leading up to next season.

I'm a regular reader of MGoBlog, which has provided a voice of sanity in the midst of the chaos. The site has a forum, which has featured plenty of "Fire RichRod" rhetoric, but there have been more level-headed opinions offered by Brian (the site's owner) and others, including this one that I made a point to bookmark and will probably read repeatedly over the next nine months. The last couple paragraphs are the ones that give me most hope:

I want to end with just a glimpse of what a more TL;DR answer would be to the question I see spread by some persistently loud posters around here dismayed at Rodriguez and wondering where the accomplishments are. Sink on these numbers, with all rankings per Rivals.

In 2005-07, Michigan brought in 23 five/four star players. Only 13 remain with the program. Eleven of those recruits came from the 2005 class, so that's just 12 five/four star recruits in our jr/sr classes right now.

In 2008-2009, the two seasons where Rodriguez had to get them to sign on the dotted line, Michigan brought in 31 five/four star recruits, with 26 still on the roster that are either sophomore, redshirt freshmen, freshmen or redshirting.

Rodriguez is stockpiling talent. Replinishing the lifeblood of a program that had received guru approvals in the past thanks in large part to brand name alone. It might not be a very savvy or seasoned team right now. I would even grant that it's not a very well coached team right now, either. But, the program has at least twice as much talent in the underclassmen ranks as it does in the upperclassmen ranks. These kids intend on being here for awhile. I hope the coach that brought him here gets the same chance.

This year's Michigan team is the youngest in the Big Ten. They're starting mostly freshmen, sophomores, and walk-ons. But as this poster notes, many of the players that RichRod has signed are highly-touted, and most of them haven't seen the field yet. It'll be a couple more years before this team matures, and thus fans need to learn a little patience. Has RichRod made some questionable decisions during games? Sure. After the Illinois game I wrote an entry that'll remain unposted blasting those sorts of things.

I'm not really going to write much about The Game here. I'd love to see a win, especially since Ohio State will be wearing their cutesy little throwback uniforms on Michigan's field. I'd love to see karma dictate the outcome, but I also thought that Bo's death would help determine the outcome in 2006, and that Henne and Hart would atone for Appalachian State in 2007. Apparently the 1969 Michigan team (read: Bo's first team who upset the Buckeyes that year) will be in attendance, so one would like to think that those sorts of "intangible" things would help.

I no longer have any illusions about that sort of thing. Michigan is young, they're relying on freshman QBs, their defense has no depth and couldn't stop Illinois. A loss would still be upsetting, but not surprising.

But long-term, Michigan's future is bright if fans are able to look at the situation rationally.

I'm still All In. I still can do no other.