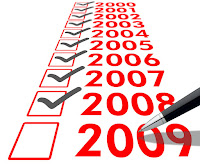 Looking back on 2009, I'd have to say that it was a pretty eventful year, featuring both highlights and lowlights. I present them both.

Getting punched in the face by grief - In mid-January, I got the phone call that my grandfather had died. As he was in failing health for some time, this was expected before I actually got the news. However, the memorial service would be held off until mid-March so that my brother and cousin could attend while on school breaks. So we had plenty of time to plan time off and make other arrangements. The week before that service, we got a phone call that my brother-in-law had died of a heart attack. So very quickly, we were set for two funerals in the same week, one anticipated, one a total punch in the face. As if that wasn't enough, I came down with the flu the night we arrived at my in-laws' house. That was hands-down the worst week of the year.

Brian McLaren, Marcus Borg, John Dominic Crossan, Barbara Brown Taylor, Jim Wallis - I heard all of these people speak this year, and got three of them to sign books. McLaren disappointed in a debate format, as he elected to give a history of the emergent movement rather than argue that the movement was a good and worthwhile thing. Borg and Crossan spoke at Eden Seminary about following Jesus in the 21st century, and were my two favorites out of the group. Taylor spoke at General Synod about narrative in the age of Twitter, and I finally was able to experience her eloquence as a speaker. Wallis also spoke at Synod: going to his presentation was sort of a last-minute decision, I thought he rambled a little, but he was okay.

Out of Eden - This was the final year that I was eligible to attend Eden Seminary's Herbster event, held for the five most recent classes of alumni to return and reflect on their ministries. I pretty well missed the entire Herbster program, but I was more interested in seeing Borg and Crossan during the subsequent spring convocation anyway. My last night there, I realized that I was more than ready to head back to Ohio to be with my family; that I had lost my sense of Eden being my "second home." Five years and the birth of a child can do that. This was compounded by realizations that many of my professors have retired or moved on from the school (to say nothing of Eden's recent move to sell part of their campus to neighboring Webster University). After being a reference point for me and my fellow graduates for so long, I've had to adjust to a new concept of reality during the second half of this year.

General Synod - This was my fourth trip to the UCC's big national gathering, which was fun in all the usual ways: seeing friends and colleagues, being a part of UCC activities and celebrations, experiencing Grand Rapids. It was also at this particular Synod that I noticed something about misplaced righteous anger: there were at least three notable happenings on the plenary floor where someone expressed offense where a more rational or patient look at the situation could have produced something more constructive. In subsequent months, I've worried whether the UCC as a denomination and Synod in particular is running more and more on righteous anger and less on calm reasoning. Don't get me wrong, there was much that I enjoyed about Synod as I always do. But people really needed to chill out a little.

The Big House - For college football fans who actually live in their favorite team's state, maybe visiting the stadium on a fall Saturday wouldn't be considered as big a deal. I on the other hand live in enemy territory and Ann Arbor is a good 3-4 hours away from where I live. This was Michigan's second-worst season in 40 years, but my brother and I didn't know that that's how it'd turn out when we went to see the then-4-and-2 Wolverines pound on Delaware State three rows up from the field on the 30-yard-line. This was my third trip and I always make sure to have a good time if only because I don't get to do it that often.

New Digs - We signed the paperwork to build a house in June, and moved in the week of Thanksgiving. It is, of course, our first house after five years in the parsonage and two and a half years in apartments before that. The experience of seeing the house in each stage of construction before its completion was both exciting and nerve-racking.

Five Years - I celebrated my five-year anniversary with my church at the end of November. It's always been a much-anticipated, special milestone for me, and one that seemingly would never come. But now it's passed, and I have a sabbatical to look forward to now. Even besides that functional aspect of it, I've learned a tremendous amount over that time, and this last year in particular has taught me what it means to engage in long-term ministry; to truly be the settled pastor of a local church. That learning did not come easily, but I'm glad that it did.

So then, what's up for 2010? At a glance, here's what's coming: my five-year ordination anniversary, Coffeewife's 30th birthday, Coffeeson's 2nd birthday, a five-week sabbatical, Coffeewife and my 8-year (!) wedding anniversary, our annual trip to Daytona, our rescheduled trip to the Upper Peninsula, another trip to Ann Arbor (my brother and I are hoping to go see them trounce Sparty), and seriously learning the bass guitar. I think that's a good foundation to build on, and I'm sure I'll blog it all.