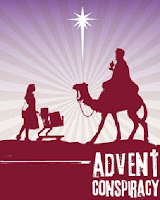 Even though it's getting pretty late in the game, I wanted to plug Advent Conspiracy. This is a movement started by three pastors attacking the overly commercialized part of Christmas from a different angle. They advocate worship and buying less, and proceeds from their book and DVD go to Living Water International, which helps dig wells in the Third World.

The media has started to pick up on the movement, too:

If it's December, then there must be frost in the air, gingerbread in the oven, and ... right on time, Bill O'Reilly and the other defenders of Christmas bemoaning the prevalence of "Happy Holidays" - rather than "Merry Christmas" - greetings.

There's a war on Christmas, O'Reilly recently reminded viewers, driven by those who "loathe the baby Jesus." This season, a holiday-dÉcor company is marketing the CHRIST-mas Tree, a bushy artificial tree with a giant cross where the trunk should be. And the Colorado-based Focus on the Family is continuing its Stand for Christmas campaign to highlight the offenses of Christmas-denying retailers. The campaign was launched, according to its website, because "citizens across the nation were growing dissatisfied with the tendency of corporations to omit references to Christmas from holiday promotions."

But to a growing group of Christians, this focus on the commercial aspect of Christmas is itself the greatest threat to one of Christianity's holiest days. "It's the shopping, the going into debt, the worrying that if I don't spend enough money, someone will think I don't love them," says Portland pastor Rick McKinley. "Christians get all bent out of shape over the fact that someone didn't say 'Merry Christmas' when I walked into the store. But why are we expecting the store to tell our story? That's just ridiculous."

McKinley is one of the leaders of an effort to do away with the frenzied activity and extravagant gift-giving of a commercial Christmas. Through a savvy viral video and marketing effort, the so-called Advent Conspiracy movement has exploded. Hundreds of churches on four continents and in at least 17 countries have signed up to participate. The Advent Conspiracy video has been viewed more than a million times on YouTube and the movement boasts nearly 45,000 fans on Facebook. Baseball superstar Albert Pujols is a supporter - he spoke at a church event in St. Louis to endorse the effort.

In the past four years, Advent Conspiracy churches have donated millions of dollars to dig wells in developing countries through Living Water International and other organizations. McKinley likes to point out that a fraction of the money Americans spend at retailers in the month of December could supply the entire world with clean water. If more Christians changed how they thought about giving at Christmas, he argues, the holiday could be transformative in a religious and practical sense.

I read the book last month, which is pretty good. The themes of Advent Conspiracy are pretty simple, and perhaps a welcome alternative for many people. This is a "true meaning of Christmas" movement that actually makes a positive difference. Join in if you're able.
By Jeff Nelson
Email ThisBlogThis!Share to TwitterShare to FacebookShare to Pinterest
Labels: Advent/Christmas, Justice Issues, Linkage
Newer Post Older Post Home