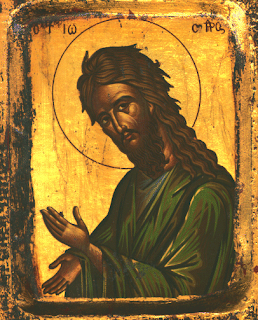 On the outside is a picture of John the Baptist in all his scruffy, locust-eating glory, decked out in camel hair. And he’s pointing a finger right at you. On the inside it says, “You brood of vipers! Get your act together or God is going to have some words with you!”

Actually, when it comes to Advent, John the Baptist is the one who brings us season’s greetings. It’s doubtful that Hallmark will be hiring him any time soon, though.

John bursts on the scene near the Jordan river, starting his ministry before Jesus starts his. He baptizes and preaches there; and neither of these actions are easy to stomach for a lot of people.

His main message is repentance. To repent is to redirect your life; one popular understanding is to “turn your life around.” A more accurate meaning of repentance is to “refocus.” Whenever a new king was crowned, heralds would proclaim, “Repent:” People were told to refocus their loyalties to the new king and the new regime.

So for John to proclaim repentance, he was preaching for them to refocus their lives to a new way of thinking, a new and different loyalty than what they’d been loyal to up to that point. And, of course, the sign of this new commitment was the act of baptism. It was a symbol of cleansing, of purification and redirecting one’s loyalty to something new.

While doing this, John has some specific people who ask him how to do this.

The crowds ask him, “What should we do?” John tells them, “Share your excesses with people who don’t have anything – food, clothing, whatever else.”

Tax collectors, notorious for collecting way more than they needed so that they could skim off the top, ask, “What should we do?” John tells them, “Collect no more than you’re supposed to.”

Roman soldiers, known for bullying citizens into giving them money, ask, “What should we do?” John tells them, “Stop using threats and violence to take from others, and be satisfied with what you have.”

John the Baptist has some plain, honest, fairly harsh words for people. He calls them out on what they’re doing. He doesn’t provide the feel-good greeting of the season, so much so that even Herod isn’t exempt, a fact that eventually lands John in prison.

On the Sunday when we’re meant to think about joy, this may not sound very joyful. John the Baptist’s words and style don’t seem to lend themselves to holiday cheer. Instead, he calls us to examine ourselves – to name our selfishness, our shortcomings, the bad things we’ve done and the good we’ve avoided doing. By calling us to this self-evaluation, John actually does want us to think about joy. He wants us to think about what we put our joy in, what brings us joy, and whether it jives with the values of God’s approaching kingdom.

But there may be problems here. First, what we say we love, what we say brings us joy, and what we actually do may not match up. Second, what brings us joy may not be positive or constructive – it may be harmful to us or others, or we may be doing it excessively or neglecting something we should be doing instead.

There’s no shortage of examples here.

On NPR the other morning, I heard about how executives at Goldman Sachs have been told to scale back when planning their holiday parties so that the rest of us won’t feel bad or resent them. Isn’t that sweet, thinking of others like that? What might John the Baptist say to them?

Tiger Woods. Need I say much more? The temptations while trying to stay true to family can be enormous for someone like him. What one says brings you joy and what you actually pursue for joy can be entirely different.

Even apart from the news, how well does what we say brings us joy and what we actually pursue for joy match up? What might John’s season’s greeting to us be?

John’s message isn’t just about condemnation, though. He doesn’t leave people hanging their heads in shame or wallowing in guilt. After all, if you’re preaching repentance, redirecting your life and your joy, then obviously there needs to be something to redirect your life and your joy to.

The spiritual writer Henri Nouwen wrote about what it means to be patient. He wrote that to be truly patient is to be willing to stay where we are and fully live in our present moment, waiting for something to be revealed to us. He wrote about how impatient people think that something better is always somewhere else, and thus they need to follow it. Impatient people don’t pay attention to the present moment, and are always going after something that ultimately doesn’t exist. An impatient person is never satisfied, and thus leads an unsatisfied life.

If we ever got an Advent card featuring John the Baptist, he probably would have some hard words for us. But he’d also have some hopeful words. He’d have words of redirecting our lives toward something better. He’d have words of refocusing on what will truly make us joyful.
By Jeff Nelson
Email ThisBlogThis!Share to TwitterShare to FacebookShare to Pinterest
Labels: Advent/Christmas, Bible, Church, Theology
Newer Post Older Post Home