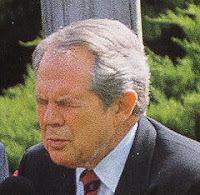 I know that you know that all press is good press, so I appreciate the shout-out. And you make God look like a big mean bully who kicks people when they are down, so I'm all over that action.

But when you say that Haiti has made a pact with me, it is totally humiliating. I may be evil incarnate, but I'm no welcher. The way you put it, making a deal with me leaves folks desperate and impoverished.

Sure, in the afterlife, but when I strike bargains with people, they first get something here on earth -- glamour, beauty, talent, wealth, fame, glory, a golden fiddle. Those Haitians have nothing, and I mean nothing. And that was before the earthquake. Haven't you seen "Crossroads"? Or "Damn Yankees"?

If I had a thing going with Haiti, there'd be lots of banks, skyscrapers, SUVs, exclusive night clubs, Botox -- that kind of thing. An 80 percent poverty rate is so not my style. Nothing against it -- I'm just saying: Not how I roll.

You're doing great work, Pat, and I don't want to clip your wings -- just, come on, you're making me look bad. And not the good kind of bad. Keep blaming God. That's working. But leave me out of it, please. Or we may need to renegotiate your own contract.

HT to Nachfolge.
By Jeff Nelson
Email ThisBlogThis!Share to TwitterShare to FacebookShare to Pinterest
Labels: Funny If It Wasn't So Sad

great!! i had to read it out loud to a teen friend who totally got the sarcasm after i explained the back situation. so saavy.

The truth is that they did make a pact with the devil.

Now the significance you put on that pact I guess has to do with whether you believe the devil is real or not.

But it is one of Haiti's founding myths.

According to Haitian national history, the revolutionary war was launched on the eve of a religious ceremony at a place in the north called Bwa Kayiman (Bois Caiman, in French). At that ceremony on August 14, 1791, an African slave named Boukman sacrificed a pig, and both Kongo and Creole spirits descended to possess the bodies of the participants, encouraging them and fortifying them for the upcoming revolutionary war. Despite deep ambivalence on the part of intellectuals, Catholics, and the moneyed classes, Vodou has always been linked with militarism and the war of independence and, through it, the pride of national sovereignty.

"The truth is that they did make a pact with the devil."

The Haitian Vodou religion is not based on worshipping the devil. In fact, thanks in part to the influence of the Roman Catholic Church, it is a religion that believes its chief god to be basically one and the same as the Judeo-Christian God. It emphasizes virtue and decries greed, the latter being something that the Christian devil encourages (as the content of this entry indicates).

The specific spirit said to inhabit the slave was named Ezili Dantor, a spirit believed to represent motherhood. That doesn't sound like much of a devil to me, either.

One of Robertson's base assumptions behind his comment is that all non-Christian religions are pagan or, to be more precise, Satanic. That's how anyone even with knowledge of Haitian history would be able to come to the conclusion that "they" made a pact with the devil.

Even besides that, are we really supposed to believe that God sent an earthquake over 200 years after the fact as punishment?

If God were in the business of smiting humanity for stupid crap, there would be a natural disaster every second--especially in America and especially in the American church.

Thanks be to God that we serve a God whose name is Love, not Vengeance. :)