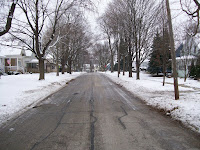 Me? I'm the only one awake so far. That could change at any moment, though.

I've got my non-notes ready to be preached. Last Sunday was low-energy, so that felt stunted. But I've got some good stuff for today. I think. The lectionary included 1 Corinthians 13 this week, and I figured it'd be good to reclaim its message as something more than just a wedding text. Because it really is much more than that. "Faith, hope, and love abide...and the greatest of these is love." How many Christians disagree whether in word or action whether love is the greatest out of those three things? How many would rather slide faith in there when nobody's looking? Yeah, that's pretty much the Corinthians' problem, too.

So then it's our annual meeting. Approving the budget, a change to the by-laws. This meeting always makes me antsy. It's mostly unfounded anxiety, but I always worry that somebody's going to use the opportunity to...what? I don't even totally know. Like I said, unfounded.

It's the last day of January. January's been a good month. It's been a good start to the year. February should be good, too. We're now two-thirds through the winter months, more or less. And now we're on the verge of Lent and all its invitation to reflect. Have I mentioned that I love the seasons that bring out the purple paraments? I probably have.

But I'm also ready to say goodbye to January, and hello to February and all that it will bring.

There's no real point to this post, I guess. It's just...January was good. And I wanted to celebrate that with you all.

And now I'll continue with my day.
By Jeff Nelson
Email ThisBlogThis!Share to TwitterShare to FacebookShare to Pinterest
Labels: For No Particular Reason
Newer Post Older Post Home