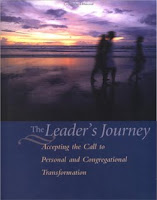 You know, after reading a certain amount of books on church leadership, this is what I start seeing on the page: "blah blah blah." And yet here I am, just starting The Leader's Journey: Accepting the Call to Personal and Congregational Transformation. I'm going to a discussion group on Tuesday dealing with missional leadership, and the facilitator wants us to read this book. It talks about how the leader has to work on his/her own transformation first, and eventually will talk about being familiar with the systems at work in the congregation. But mostly, right now, to me: "blah blah blah."

We watched Role Models this past week, starring Paul Rudd and Sean William Scott as two guys who get in trouble with the law and are forced into community service to avoid jail time. They are sent to Sturdy Wings, a "big brother, big sister" sort of program where they take on mentoring duties for two kids. Rudd's character ends up with a mock-Medieval battle enthusiast whose parents want to be "normal," and Scott's character ends up with a younger black child whose previous mentors haven't lasted longer than a day. The assumption beforehand may be that you'll want to slap the kids, I think you want to slap the two guys for their self-centeredness. But that's the point, and they learn valuable life lessons and etc., etc., etc. The Medieval stuff provides some of the funniest moments, as you watch people slide in and out of character and as you wonder at how seriously they take it. The always-hilarious Jane Lynch plays the founder of Sturdy Wings. The movie pretty much progresses the way you'd expect it to. Just enjoy how you get there.

This is the time of year where I pay a little more attention to events in the WWE. The past few years I've tended to fade in and out of hardcore, must-watch interest. But this past Sunday was the Royal Rumble, the pay-per-view that kicks off the "road to Wrestlemania," which is the WWE's Super Bowl. The Rumble features a match where 30 guys enter, one every few minutes, the only method of elimination being throwing someone over the top rope. The winner gets a title shot at Wrestlemania. Anyway, Edge returned as a surprise entrant and won. The other matches were okay, but nothing special.

I then caught the tail end of the Grammys. I'll be honest: I don't consider the Grammys to be all that credible. Remember the year that Jethro Tull won Best Metal Album? The Grateful Dead was nominated in that category that year as well. While the Oscars recognize true artistry (with admittedly all the politicking that goes on behind the scenes), the Grammys go more on popularity. And even then, like the above example, somebody or a couple somebodies who decide these things don't really know all that much about music. So then Taylor Swift wins Album of the Year. Yes, over Dave Matthews Band. That peeved me, of course. Swift wasn't the worst choice, but you know how she got all that flack for her wobbly singing performance? Well, DMB was the top touring act (you know...live performance) of last year. What's my point? You can sound great in the studio, or you can sound great actually performing. Screw off, Grammys.

I am in a mood today, aren't I? Well, something that made me happy this week happened on Wednesday, which was National Signing Day for high school football players choosing which college to play for. Even after two losing seasons, RichRod and Michigan scored its third top 10/15 class in a row, including a highly regarded QB and safety. Talent is being stockpiled, defense is being rebuilt, offense is nearly there already. There's nowhere to go but up.

Hey, have you heard of BlakRoc? You probably haven't. This is the Black Keys collaborating with a bunch of hip hop artists. Here they are performing on Letterman: