I finished Nightlight, which was a clever send-up of Twilight. The book isn't that long; at one point one of the characters even says something about not having to wait four books and several thousands of pages to see how things turn out. The main character, Belle, is hilariously self-centered and deluded, which is a pretty funny amplification of Bella. My one gripe is that there were numerous typos: words were either spelled wrong or missing. Since it's by the Harvard Lampoon, I would've triple-checked it.

I also read the tenth and final Sandman graphic novel, The Wake. Here the entire universe gathers to pay their respects to the deceased Morpheus, and the new Dream prepares to meet his siblings. Then there are three epilogues featuring characters who have appeared over the course of the series, including Shakespeare, who was commissioned by Dream to write The Tempest. This is truly an excellent series, if you ever get the chance to read it.

I watched the WWE Elimination Chamber pay-per-view on Sunday night. I love the Road to Wrestlemania, as they really step up their game during these months. The elimination chamber match itself (of which there are two on this show) is a chain-link structure enclosing the ring. Six guys enter, four of whom are locked in plexiglass pods. Two guys start the match, and every five minutes another guy is "randomly" selected to exit his pod and enter the match. Some good stuff, with John Cena winning his match and the title only to lose it in a minute to Batista. And then Shawn Michaels popped up through the floor during the other match to screw The Undertaker out of his title and to set up their rematch at WM. The latter was somewhat predictable for people who've been following the storylines. But it was an enjoyable show.

The next night on Monday Night RAW, they showed a recap promo of Shawn Michaels trying for months to get his WM rematch with The Undertaker, which I as a fanboy thought was incredible. I know that only like two people who read this blog are wrestling fans, but I wanted to include it here because I just thought it was that cool:

At The Fettered Heart, Ryan shares his reflections on Lent, including a piece of commentary about many people's approaches to the season that hits the mark uncomfortably well:

There seems to be little about drawing nearer to God or to deepen ones faith. It seems to be about subtraction and addition of self and other parts of other’s selves. Lent becomes a depository of crap and broken hopes and ideas. Lent loses its appeal and the fat part of Strove Tuesday conquers the solemn stance of relationship with each other. Difficulties arrive and relationships depart.

Here's another song from BlakRoc:

And with a HT to Songbird, here's a bunny with pancakes on its head: 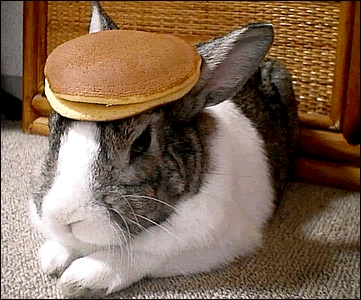